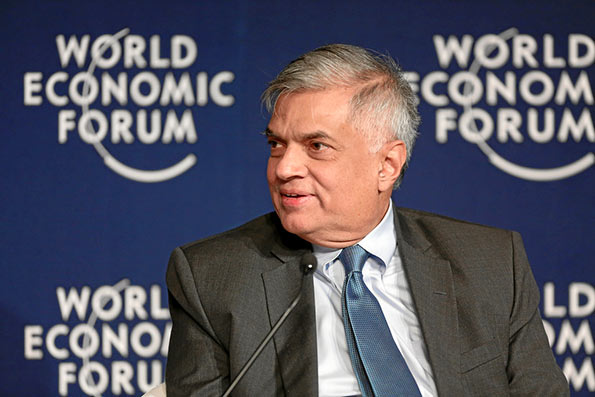 Tensions between the U.S. and China are unlikely to escalate into a global trade war, even as geopolitical friction intensifies across Asia, Sri Lanka’s prime minister said.

Ranil Wickremesinghe said President-elect Donald Trump’s election pledge to bring back jobs and revive U.S. manufacturing has more to do with Mexico than with China.

“I can’t see a major trade war,” Wickremesinghe said in an interview with Bloomberg on Tuesday at the World Economic Forum in Davos, Switzerland. “Modern China is partly a creation of the U.S. And these are interdependent economies. So what do you do?”

“He may impose some restrictions, maybe nominally, but the Chinese have also said they will not allow any unilateral action by USA,” he added. “There may be discussions on how the deficit can be narrowed to the U.S. advantage. This may be the initial negotiating position. But I can’t see how they can go beyond it.”

At the same time, Wickremesinghe said, China, India and Japan are trying to maintain their own spheres of influence in the region.

“There will be some friction as they try to assert themselves, each one having their own area of influence. This will be more acute in the case of China and Japan, who are next to each other,” Wickremesinghe said.

There is also tension between China and India, he said, but this is unlikely to lead to conflict because India is focused on domestic economic reforms.

“India is also trying to identify a role for itself in the region, they don’t want to be challenged by others,” Wickremesinghe said. “We expect this to go on for some time, but it is not going to break out into a war.”

Wickremesinghe said his country was busy trying to expand and deepen an existing trade agreement with India, Sri Lanka’s largest trading partner, to include various services. He said he has told China that Sri Lanka values its relationship with India.

Referring to Indonesia’s anger over a bearish call on Indonesian equities from JPMorgan Chase & Co., Wickremesinghe said large Asian economies such as China, India and Indonesia were now using their new economic clout to push back against western banks.

Indonesia’s government had said it terminated all business relationships with the bank after the release of a November research report that Jakarta labeled not “accurate or credible.” JPMorgan reversed its call in a January report.

“It’s a decision of the Asian countries, just using their new clout because they feel that a lot of this is being owned out there in the west, and it can be unfair to them,” he said. “You’re going to see it more.” Wickremesinghe noted smaller countries like Sri Lanka would not take such action.

Sri Lanka is also on track to sell a $1.1 billion stake in a major port to China despite protests opposing the project. Wickremesinghe said details of the Hambantota port project will be presented to parliament in February — it is then the total amount of land for the port’s surrounding economic and industrial zone would be finalized.

“That should come through. I can’t see any major impediments,” he said.

There have been protests against the deal in recent months, as local villagers and Buddhist monks clash with government supporters over the port and a surrounding economic zone.

“As far as security aspects are concerned, that is ours,” he said. “It’s open for anyone to come and invest commercially,” Bloomberg reports.

2 Responses to Hambantota Port project should come through – PM