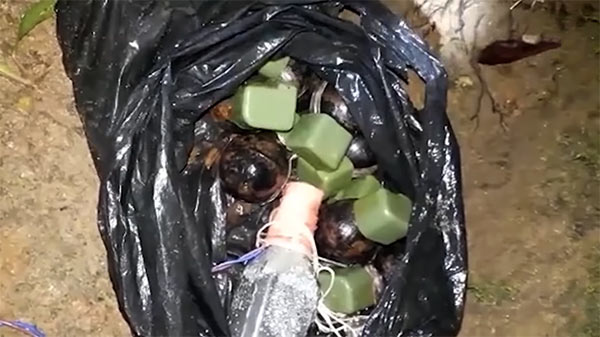 A bag containing 13 hand grenades was recovered from the Dickhena Vidyalaya school grounds in Baduraliya in Matugama by Baduraliya Police last night.

A villager who noticed a suspicious individual running near a school building informed the watcher and the members of the defence committee on duty. Then, they found the suspicious parcel with a bottle containing ammunition connected to a wire cord. The principal who rushed to the scene on their information called the police and army.

The army opened the parcel to find a stock of hand grenades and a glass bottle stuffed with ammunition and pellets connected to a wire cord which they immediately removed from the school yard. Baduraliya Police are conducting further investigations.