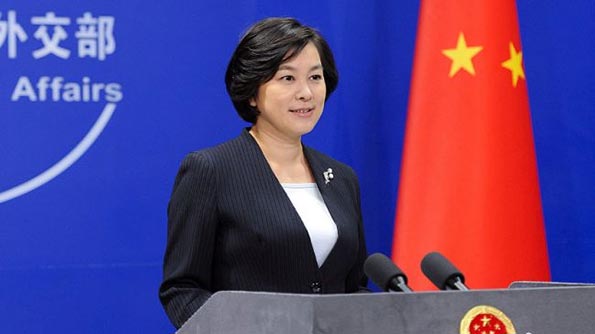 China today reacted guardedly to new Sri Lankan President Maithripala Sirisena’s India visit, saying it is “happy to see” close and friendly relations between them and emphasised that sound ties among the three nations will be conducive to the entire region.

“We want to develop strategic cooperative partnership with India for peace and prosperity and wants the same with Sri Lanka,” she said.

India and Sri Lanka yesterday signed a civil nuclear cooperation agreement which is seen as an effort by New Delhi to counter growing Chinese influence in the island nation.

This is the first such deal signed by Sri Lanka with any foreign country, reflecting the new Lankan government’s pro- India approach.

The pact was signed after talks between Prime Minister Narendra Modi and the new Sri Lankan President who chose India for his maiden foreign visit after assuming charge following a bitter presidential poll.

Both the leaders also decided to expand defence and security cooperation between the two countries.

India’s ties with Sri Lanka had taken a hit during the rule of Sirisena’s predecessor Mahinda Rajapaksa as China had expanded its footprint in the country by building ports, highways and participating in other infrastructure projects.
After his visit to India, the new Sri Lankan President will visit China next month for talks with the top leadership.

Sirisena will arrive in China on March 26 to attend the annual Boao Forum for Asia, a prestigious Chinese think tank, modelled on the ‘Summer Davos’ meet here, and will hold talks with President Xi Jinping.