Harin hits out at “Cabinet conspirators” 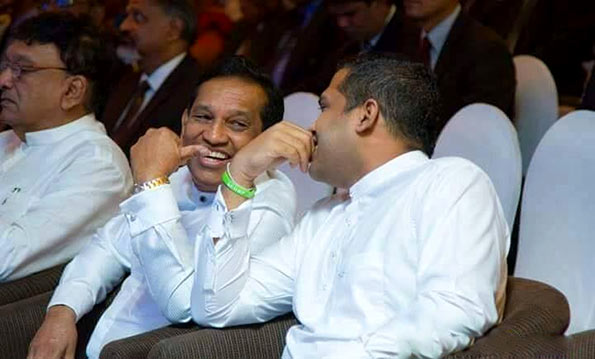 Telecommunications and Digital Infrastructure Minister Harin Fernando hit out at “conspirators” within the ruling camp trying to sabotage the understanding between the UNP and the SLFP for petty political gains.

Speaking at the Cabinet meeting on Wednesday morning, the minister said some ministers of the Cabinet, including Cabinet Spokesman Rajitha Senaratne unfairly criticised him for defending the government’s position on the Avant Garde issue during television debates.

“I never tried to defend the conduct of the security firm. I always stood by the government’s position on the matter. I said the President and the Prime Minister would make a final decision on the security company.

I also explained the legal background pertaining to the matter. But, the next day, the Cabinet Minister criticized me. He dubbed me as a person who goes to night clubs,” Fernando said, directing his criticism at Health Minister Senaratne who was not present at the Cabinet meeting on Wednesday.

“I am a father of two and I have a good family life. It is unfair to criticize me as a person who goes to night clubs,” the Cabinet Minister added.

He said former Law and Order Minister Thilak Marapana’s resignation, which clearly showed the government’s commitment to good governance, was overshadowed by “media shows” initiated by certain cabinet members who only think about their personal agendas.

The minister also alleged that Minister Senaratne’s son, Chathura Senaratne, a Parliamentarian of the UNP, barged in to his ministry in search of documents of alleged ‘deals’ done by the Telecommunications Ministry.

He urged the President and the Prime Minister to inquire into the matter and take action against responsible parties.

Meanwhile, Plantation Minister Navin Dissanayake criticized a statement made by Transport Minister Nimal Siripala de Silva against the new government and its policies.

“The Transport Minister had said goof governance did not exist in the new government. He had also said the President would form an SLFP government. Such statements are damaging to the unity between the two main parties,” Dissanayake said.

Responding to Dissanayake, de Silva said he never made such a statement. At this point, Minister Harin Fernando said he even had a video clip of the speech made by the Transport Minister.

“We too can play various political games but we have realized the importance of the MOU signed between the UNP and the SLFP. But we cannot see the same commitment from some members of the cabinet,” he asserted.

Prime Minister Ranil Wickremesinghe, intervening in the argument, said members of the government should understand their duties and act in a responsible manner.

“We all have a responsibility to protect the government. We have embarked on comprehensive political reforms. Therefore, every member of the government should support this process,” the Prime Minister said.

Meanwhile, some ministers raised concerns on “cabinet secrets” being leaked to media.

To address this problem, Minister Talatha Athukorala said cabinet members should not be allowed to bring their mobile phones to Cabinet meetings.

Responding to that claim, President Maithripala Sirisena said the best solution was “self-regulation” among members of the cabinet.

” There is no point in holding meetings if we cannot act in a responsible manner. It is the responsibility of cabinet members to protect the confidentiality of our meetings,” the President stressed.