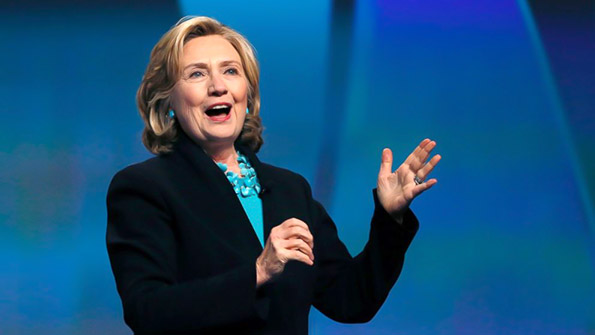 Ending two years of speculation and coy denials, Hillary Rodham Clinton announced on Sunday that she would seek the presidency for a second time, immediately establishing herself as the likely 2016 Democratic nominee.

“I’m running for president,” she said with a smile near the end of a two-minute video released just after 3 p.m.

“Everyday Americans need a champion. And I want to be that champion,” Mrs. Clinton said. “So I’m hitting the road to earn your vote — because it’s your time. And I hope you’ll join me on this journey.”

Mr. Podesta said that Mrs. Clinton would meet soon with voters in Iowa and host a formal kickoff event some time next month.

The announcement effectively began what could be one of the least contested races, without an incumbent, for the Democratic presidential nomination in recent history — a stark contrast to the 2008 primaries, when Mrs. Clinton, the early front-runner, ended up in a long and expensive battle won by Barack Obama. It could also be the first time a woman captures a major party’s nomination.

Regardless of the outcome, Mrs. Clinton’s 2016 campaign will open a new chapter in the extraordinary life of a public figure who has captivated and polarized the country since her husband, former President Bill Clinton, declared his intention to run for president in 1991. Mrs. Clinton was the co-star of the Clinton administration, the only first lady ever elected to the United States Senate and a globe-trotting diplomat who surprised her party by serving dutifully under the president who defeated her.

She will embark on her latest — and perhaps last — bid for the White House with nearly universal name recognition and a strong base of support, particularly among women. But in a campaign that will inevitably be about the future, Mrs. Clinton, 67, enters as a quintessential baby boomer, associated with the 1990s and with the drama of the Bill Clinton years.

This campaign will begin on a small scale and build up to an effort likely to cost more than any presidential bid waged before, with Mrs. Clinton’s supporters and outside “super PACs” looking to raise as much as $2.5 billion in a blitz of donations from Democrats who overwhelmingly support her candidacy. Much of that enthusiasm is tied to the chance to make history by electing a woman to the presidency. But some, too, owes to the lack of compelling alternatives in a party trying desperately to hold on to the White House when Republicans control the House and the Senate.

Mrs. Clinton’s declaration on Sunday is to be followed by a series of intimate but critical campaign events in Iowa and New Hampshire. She will use them to reintroduce herself to voters and begin to lay out the central theme of her candidacy: improving the economic fortunes of the middle class, with an emphasis on increasing wages and reducing income inequality.

In the video, she does not appear until after 90 seconds of images featuring personal stories of others, each describing how they are getting ready to start something new.

The video prominently features a black couple expecting a child, a young Asian-American woman, and two men who say they are getting married. It also shows plenty of the white, working-class people who were crucial to her previous White House bid and signals that she intends to make helping the middle class and reducing income inequality major themes of her campaign.

Near the end of the video, Mrs. Clinton finally appears outside a suburban home and says: “I’m getting ready to do something too. I’m running for president.”

Her return to the campaign trail this week offers her a fortuitous circumstance: Tuesday is National Equal Pay Day, the point in the year at which, on average, a woman’s pay for working in 2014 and 2015 would equal a man’s pay just for 2014. Pay equity is an issue that Mrs. Clinton’s candidacy will take up in earnest, along with others important to many women, like paid family and medical leave, a higher minimum wage and affordable access to child care.

Unlike in her 2008 campaign, when she played down gender and sought to show she was tough enough to be president, Mrs. Clinton plans to highlight that she is a grandmother and trumpet her chance to make history.

“Being the first woman to run for president with a real chance of winning, that’s a wild card, but potentially a net positive, particularly for undecided women,” said Scott Keeter, director of survey research at the Pew Research Center.

It was not surprising that Mrs. Clinton chose to make her intentions public in a video circulated on social media. Since she left the State Department in early 2013, she has found a welcome outlet in Twitter, which has allowed her to express her opinions in terse missives while avoiding the news conferences that are likely to become a mainstay now that she is a presidential candidate.

She will also look for ways to demonstrate that, after more than three decades in public life, she understands the ways of modern campaigns and can appeal to younger voters. Mrs. Clinton’s 35-year-old campaign manager, Robby Mook, known for exploiting technology, data and analytics to win elections, has already dispatched field organizers to Iowa, New Hampshire, Nevada and South Carolina.

For all the months of quiet and careful planning, however, her campaign’s rollout did not come off as smoothly as envisioned. Rather than gliding into the spotlight as an above-the-fray former secretary of state, Mrs. Clinton entered the 2016 race in the midst of lingering questions about her exclusive use of a private email address while at the State Department and about donations from foreign countries to her family’s philanthropic foundation.

Mr. Podesta, the campaign chairman, assured donors that both controversies would pass and that the momentum would shift as soon as Mrs. Clinton was officially a candidate, according to a person involved in those discussions.
Mrs. Clinton will enter the race with a strong base of support: 81 percent of Democrats said they would consider voting for her, according to a CBS News poll conducted in February. That support dwarfs that of her potential rivals for the nomination, including former Gov. Martin O’Malley of Maryland, former Senator Jim Webb of Virginia and Senator Bernard Sanders, an independent from Vermont who could run as a Democrat.

But the roller coaster of a presidential campaign can erode even the most seemingly certain advantages. Just over eight years ago, Mrs. Clinton began that campaign with an email to supporters declaring that she was “in to win.” That announcement began a downward trajectory in which she went from being considered the inevitable nominee to finishing in third place in the Iowa caucuses, behind Mr. Obama and John Edwards.

She went on to pick up primary victories in crucial battleground states like Ohio and Pennsylvania, but by then Mr. Obama had an edge in the fight for delegates.

In her 2008 concession speech, Mrs. Clinton sought to energize the women who had supported her candidacy.

“Although we weren’t able to shatter that highest, hardest glass ceiling this time, thanks to you, it’s got about 18 million cracks in it,” she said. “And the light is shining through like never before, filling us all with the hope and the sure knowledge that the path will be a little easier next time.”

This time, Mrs. Clinton’s aides have signaled that she will take nothing for granted and present herself as a more humble candidate, as unencumbered by the trappings of power and celebrity as is possible for a universally recognized former first lady, secretary of state and presidential candidate.

There may be little room for error, though, for Mrs. Clinton, who will begin her campaign under the glare of intense media scrutiny and criticism from a broad field of potential Republican opponents, including former Gov. Jeb Bush of Florida, Gov. Scott Walker of Wisconsin, and Senators Ted Cruz of Texas, Marco Rubio of Florida and Rand Paul of Kentucky — all of whom will try to prove they are best positioned to defeat her.