How the controversial Darusman report cynically whitewashes the terroristic LTTE: The horrifying doings of the ‘world’s most disciplined militant group’ 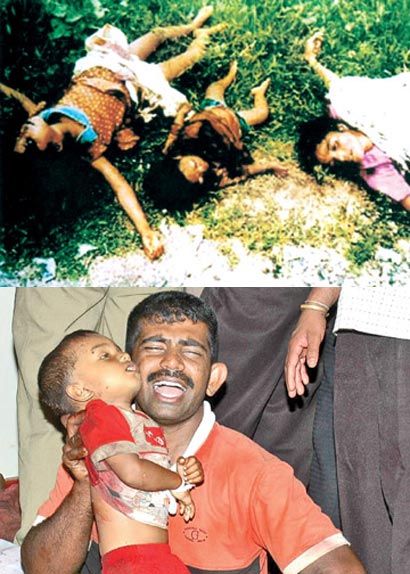 While the world had been horror-struck by the gruesome terroristic acts of the LTTE over nearly 30 years, the controversial Darusman report, which Sri Lanka totally rejects, attempts to give the LTTE some dubious respectability in the most cynical fashion.The following quote from the report proves the point:

The LTTE began as a Tamil liberation movement and eventually became the most disciplined and most nationalist of the Tamil militant groups, emerging as the dominant force espousing a separatist agenda in the mid-1980s.

However, it is plain to see that this is nothing but a childish attempt at whitewashing the LTTE which emerged as the world’s most brutal terror outfit. Our pictures here of instances of LTTE savagery over the years prove the point.

2 Responses to How the controversial Darusman report cynically whitewashes the terroristic LTTE: The horrifying doings of the ‘world’s most disciplined militant group’