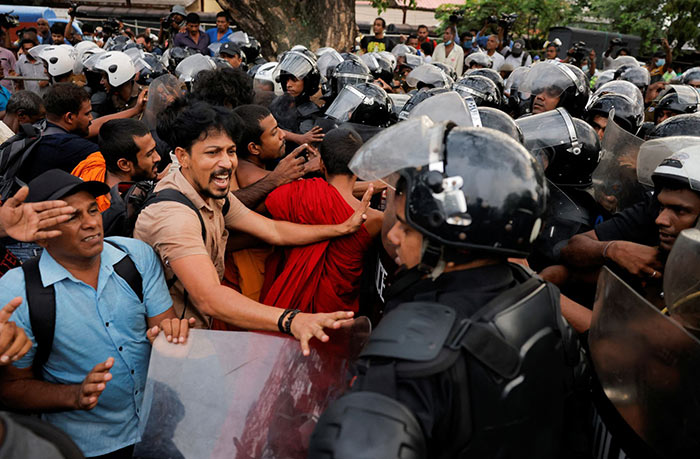 Hundreds of people marched in Sri Lanka’s largest city Colombo on Wednesday protesting against higher taxes, inflation and alleged state-led repression as the country struggles to emerge from its worst financial crisis in seven decades.

The anti-government protest, jointly organised by opposition political parties, trade unions and civil society groups, was blocked by police as marchers attempted to reach a central part of the city where the president’s house and other ministries are located.

“People can barely eat three meals a day and this government has done nothing to support people other than impose more and more taxes. We need solutions and we will keep fighting for them,” Ceylon Teachers’ Union Secretary Joseph Stalin said.

Sri Lanka has been gripped by a deep financial crisis this year caused by record-low foreign exchange reserves that has left the island of 22 million people struggling to pay for essential imports including fuel, food, cooking gas and medicine.

Widespread protests in July resulted in former President Gotabaya Rajapaksa fleeing the country and resigning after protesters stormed his office and residence.

His successor President Ranil Wickremesinghe will be presenting his first budget on Nov. 14 that is likely to include steep tax increases and other reforms to put the country’s tattered economy back on track and get approval from the International Monetary Fund (IMF) for a $2.9 billion bailout.

However, increased taxes, which will include corporate and personal income taxes hiked to a high of 30%, coming on top of soaring inflation that hit 66% in October, is triggering public discontent.

Protesters carrying national and black flags shouted slogans of “Ranil go home,” during the march and called for new elections. They also accused the government of using draconian anti-terrorism legislation to crack down on protest leaders and jail two of them.

“Everyone must be within the law. That is democracy. But this government has been using anti-terrorism laws to repress protest leaders and this must be stopped,” said main opposition Samagi Jana Balawegaya (SJB) senior member Eran Wickramaratne.

“Everyone must stand up against this government. We have to fight for our rights.”