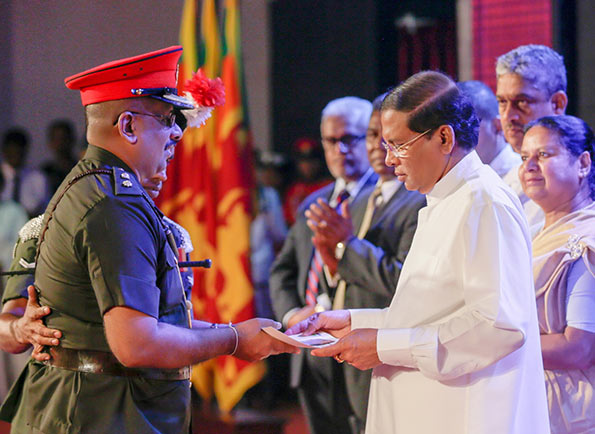 “Whatever abuses, insults and allegations directed to me, I am dedicated to make a similar commitment like the valiant war heroes who made sacrifices to bring about an ever lasting peace in the country”, says President Maithripala Sirisena.

“Some narrow-minded political extremists are accusing me stating that I am trying to break the country into two parts by arresting the members of intelligent sections and thereby destroying the national security. But, I refuse all these allegations as the commander of the tri-forces who is responsible for the security of the country”, the President said.

The President made these remarks at the ceremony held at the Temple Trees yesterday (Jan. 25) to issue ‘Virusara Varaprasada’ benefit card offered to the families of the disabled war heroes of the tri-forces by the State Ministry of Defense.

President Sirisena said he would be committed to make the Sri Lankan Tri-forces to a world renowned force while protecting the dignity of them. “According to the responsibility I had as a reasonable minister before January 08 2015 and with the responsibility I have today, I will work to take the country towards the development by strengthening of the national security”, he said.

“No matter who was the Leader of this country before January 08, 2015 and after January 08, the country today has a questionnaire to answer in front of the international community. The civil society is also requesting us to answer it. Therefore, the government should answer it”, the President further stated. “The investigations regarding that will never aim war heroes or the members of the intelligent service”, he added.

“Some people have started to speak about blood today. Whatever religion we follow, whatever language we speak, we all have the same blood”, the President said. He also pointed out that everybody should get together to build a country where every people can live with peace and happiness by discarding the narrow ideas as the people in a developed civilization.

The ‘Virusara Varaprasada’ benefit card is an honor extended to war heroes for their peerless commitment done. This is offered to the offered to the family members of the war heroes by the State Ministry of Defense. This covers the sections of customer services, health, education, finance and insurance.

The President symbolically handed over the Virisara cards and 100 scholarships to the children from Jaffna, Mannar and Vavuniya at this occasion. 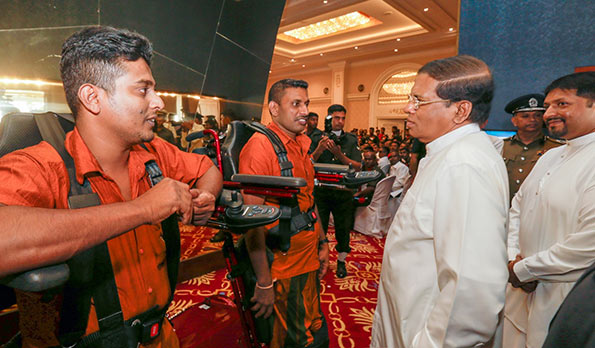