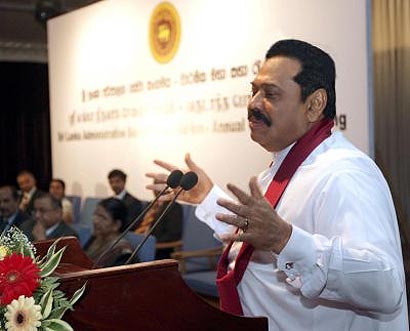 President Mahinda Rajapaksa yesterday stated that he only needed five more members to complete the 2/3rd majority in parliament. He added that before the door was closed however now it is open for anyone who wants to join the government.

President said this at the 28th annual general meeting of the Public Adminis-tration Service Association at the BMICH.Following is the speech delivered by President Mahinda Rajapaksa at the Annual Convention of Sri Lanka Administration Service at BMICH yesterday

When we govern the country, you, the officers of the Sri Lanka Administration Service, are a group that work very closely with us. You are the most important link between the people and the political leadership. I remember that in the past, the Government Agent signs his letters to the public as ‘your obedient servant’. I have not seen the Provincial Secretaries or District Secretaries signing letters as ‘obedient servants’. I do not know whether you have withdrawn from the role of a servant of the people. Whether you sign in this way or not, the fact remains that you are a servant of the people. I am a representative of the people, but I am also a servant of the public. Hence, I am glad to participate in the anniversary of officers who are committed to serve the people.

Today, the public service sector is very strong. Similarly, we have created the background required for strengthening the Sri Lanka Administration Service.

Those who join the public service or administration service must ask themselves a deep seeded question. You are aware earlier, that the armed conflict was the biggest obstacle to developing the country. The other was the lack of interest or funds to develop infrastructure. We have eliminated the world’s most ruthless terrorist organization from our country in a short period of three years. The question is whether the public sector, including the officers of the administrative service, are able to work at a similar pace?

Hambantota Port and many other large scale infrastructure projects were completed in three years. Is the public sector working at a similar speed?

I do not accept that our public service is incapable. There is enough evidence in history to show this. The Civil Service started during the colonial era. It was set up to collect tax for the colonial rulers. After we became a republic in 1972, the Civil Service became the Sri Lanka Administration Service. The Civil Service, which was set up for tax collection for colonial rulers, has been changed to a public service to build all aspects of public life. At times our public sector has amazed the world with their outstanding work.

When the Tsunami tragedy struck killing 40,000 people, the public sector responded with great commitment with the administrative service giving a good leadership.

When powerful nations take years to restore normalcy after floods or cyclones, we only took one year to overcome such a disaster. The public officers are able to conduct a sudden election in conditions of least facilities throughout the country anytime. During the final phase of the humanitarian operation, hundreds of thousands of people sought relief due to displacement. The world was skeptical whether the Sri Lankan government is able to safeguard these people. But, with your drive and dedication, the state was able to protect these thousands of people, not letting them go hungry by skipping even a meal. The public service has demonstrated such efficiency.

However, I must ask you, whether you display the same efficiency when it comes to addressing day to day needs of the public.

We can not accept anymore, public servants working the same pace they did in the pre-conflict period.

When the construction of the port ended less than nine months before the targeted date and when the bridges are constructed in 60 days, the public service officials should be similarly efficient. If public service lack efficiency and is unable to keep up with the pace of the development including infrastructure, its inefficiency becomes more apparent.

Therefore, we need a public service free of lethargy. If technology is developed to the extent of fax machines, email and text messaging, why does it take 14 days to reply to a letter, is the circular meant for the future? Or to reverse the country’s progress? Is it worth the while for the public service official to hang around in the Head Office of one’s own institution for days to adjust one’s salary increments? There are officials who ask for request letters when information is sought for the compilation of my speeches. Then what is the use of this public service for the nation which bears a salary bill of 300 billion rupees? All of us should provide answers to these questions. Yourselves, who provide direction to the public service through the administrative service, should provide answers.

Today, we have established a strong government with an almost 2/3 majority. We have built this country to be one of the strongest nations in Asia free of anarchy. This government is not unstable. This is the strength needed for you to work freely. We have directed the path of the Mahinda Chintana towards the benefit of the public. When developing the country, the government and public service cannot be on two different sides. The public service cannot claim to be independent and do nothing when the government accelerates its development drive. We are all here on behalf of the public. Therefore, you, being the servant of the public, bear great responsibility. You are aware of the way we stepped in to protect the military officials who led the humanitarian operation. You know how we protected our soldiers when traitorous claims were made that shooting occurred when white flags were raised. That was during the humanitarian operations.