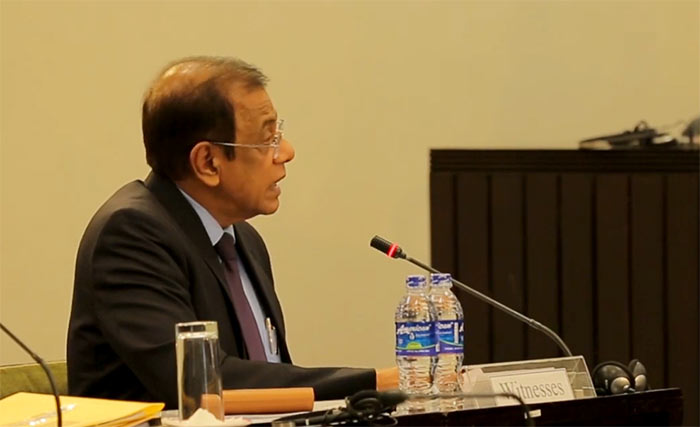 Former Defence Secretary Hemasiri Fernando had not seen any intelligence report produced by the Directorate of Military Intelligence (DMI) despite they had been addressed to him, it was revealed before the Presidential Commission of Investigation (PCoI) into the Easter Sunday Attacks on Tuesday (29).

During his testimony, the Commission showed Fernando several DMI reports sent to the Ministry of Defense containing the details on the conduct of National Thowheed Jamaat leader Zaharan Hashim and his followers in the pre-Easter Attack period and then Fernando responded that it was the first time he saw such a report.

“Although these reports had been addressed to the Defence Secretary, they are directly forwarded to the State Intelligence Service (SIS) Director. He should brief me if some extraordinary information is there,” he said. After scrutinizing the reports shown to him by the PCoI, the former Defence Secretary commented that all those reports have been properly prepared by the DMI along with analysis of the details given.

“I am worried so worried as to why I was not briefed on the important details in these reports by the SIS.

I could have taken certain preventive measures, if these reports were brought to my attention,” he added.

The witness further said that then SIS Director SDIG Nilantha Jayawardena had a phone conversation with him following the WhatsApp images of the motorcycle blast in Kattankudy on April 16 last year, but did not mention that Zaharan and his supporters were responsible for the blast.

“Having provided bits and pieces of information to me, now they try to hold me responsible for the Easter attacks,” Fernando told the Commission in an aggressive mood.

When the PCoI asked him what action he could have taken if he was provided with full information, Fernando said he could have contacted the then President Maithripala Sirisena and got instructions.

“If I asked him whether I shall inform the Prime Minister, I know the answer he would have given to me. At least, I could have asked the President whether a curfew should be imposed,” he added.

In response to a question by the Commission as to why the witness did not contact the President after receiving the April 20 intelligence information, Fernando said, he was shocked at that moment and felt that there was no sufficient time to do anything to prevent it.

“I asked SDIG Jayawardena what should be done.

I also called the Inspector General of Police and informed him,” he said.

The witness also said that Zaharan and his group had arrived in Colombo about three days before the bombings and that the Security Forces had not been able to detect any of them.

1 Response to I never saw any DMI intelligence report – Hemasiri