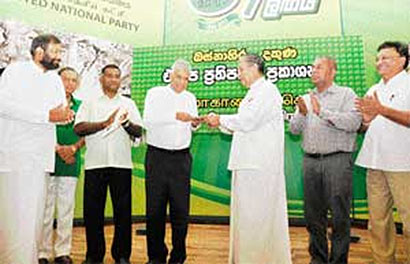 Urging the public to vote the UNP into power at the forthcoming Western and Southern Provincial Council Elections,the party’s National Leader Ranil Wickremesinghe said that the people including the armed forces had been given a raw deal by the government.

Addressing a ceremony at Sirikotha to launch the UNP’s manifestos for both provinces entitled, Bala Peraliyata Kola Eliya, Wickremesinghe said that nearly five years after the war had ended the Rajapaksa regime which was bereft of ideas had failed how to bring down the cost living, reduce the unemployment rate or develop the economy, education and health sectors.

The policy documents set out the various measures that would be implemented in increasing revenue, overcoming the acute unemployment crisis,providing fertiliser subsidies, improving the health and education sectors,developing agriculture and fisheries, protecting the environment, overcoming the drug menace, providing relief for senior citizens, disabled people and three wheel taxi drivers, working towards establishing a Freedom of Information Act and a Provincial Unit to tackle bribery and corruption and the creation of an Advisory Council to assist the respective Councils to fulfil their objectives and goals.

The UNP leader appealed to those who had been duped by the government with successive bogus election promises and wanted to teach it a lesson not to waste their franchise by voting for smaller parties. “By giving your vote to a smaller party, you would be actually helping the government. So,I appeal to the public to place their trust in the UNP and install it in power with a big majority so that it could work for the betterment of the country without any obstacles being placed in its path.”

The UNP’s revival began with the establishment of the Leadership Council late last year.The next stage would be the Jana Bala Mehevuma to force the powers that be to hold Presidential and Parliamentary Elections, Wickremesinghe said, observing that the only thing the Rajapaksa regime excelled at was intimidating its political opponents and the independent media by unleashing its goon squads in white vans besodes deceiving the people by claiming that the third successive resolution against it before the ongoing United Nations Human Rights Council annual sessions was against the country. But, in fact, it was an indictment against its failure to implement the rule of law, protect human rights and establish good governance, he added.

The UNP had a record of developing the economy and providing salary increases in keeping with cost of living. In contrast the government was yet to honour its repeated election promises of salary hikes. Instead, it had provided the public sector with allowances which were grossly inadequate when compared with inflation coupled with the skyrocketing cost of living, he pointed out.

Wickremesinghe said that the Rajapaksas were masquerading as the greatest patriots, but if not for him they would have been hauled up before the International Criminal Court(ICC) by now. “It was because I, during my tenure as Prime Minister(2001 to 2004), refused to sign the Rome Statute which established the ICC that leading figures in the current administration and security establishment were not obliged to appear before the ICC to face the charges that have been leveled against them. We not only protected the security forces but also respected the dignity of their profession by not forcing them to clean drains and sell vegetables. I urge the people of the Western and Southern Provinces including members of the armed services and Police to place their trust in the UNP,so as to ensure that their families are provided with a better life.”

The Leadership Council Chairman Karu Jayasuriya said that the manifestos for the Western and Southern Provincial Council Polls were comprehensive documents which dealt with all aspects of peoples daily lives. He pledged that the UNP, if given an opportunity to implement their proposals, would be able to ease the burdens that the Rajapaksa regime had heaped on them.

1 Response to I saved Govt. from International Criminal Court – Ranil