I will establish new government to execute my policies – President Gotabaya 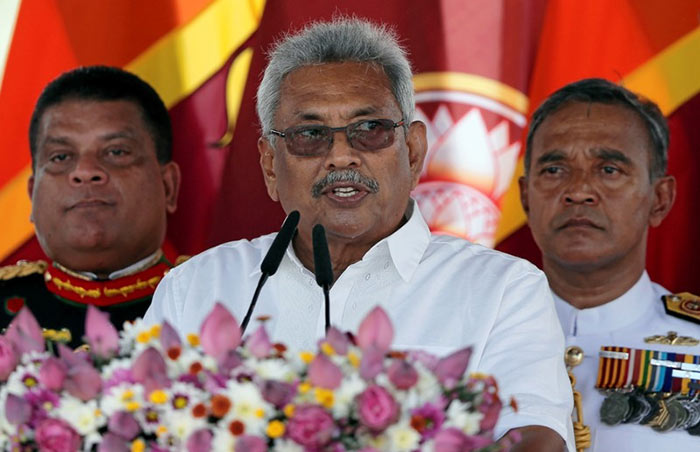 President Gotabaya Rajapaksa says that he will establish a new government that can implement his policies.

President Rajapaksa thanked all those who voted for him at the Presidential Election and those who exercised their right to vote regardless of whom they voted for.

President Rajapaksa said: “We knew right from the start that the main factor of this election victory is the Sinhalese majority of the country.”

“Although I knew that the Presidential Election could have been won with only the support of the Sinhalese, I made a special request from the Tamil and Muslim people to be partners in that victory.”

“The response to that was not up to my expectation.”

“However, I, as your new President, invite you all again to work together with me for the future prosperity of the country as true Sri Lankans.”

“As the President, my responsibility is to serve all people in the country. Accordingly, I will protect the civil rights of all those voted for me as well as those who didn’t,” he added.

President stated that he was given this mandate to implement the people-centered program created by the people and for the people. This is a program that will ensure the unity and the sovereignty of the nation, he added.

President Gotabaya Rajapaksa said that all the goals included in his manifesto will be fulfilled within his tenure.

He said that the will consider ensuring national security as the main responsibility of his government and rebuild the national security mechanism needed to protect the motherland from terrorism, underworld activity, theft, extortionists, drug racketeers, and women and child abuse.

President Rajapaksa said that they intend to act cordially with all foreign nations.

“We want to remain neutral in our foreign relations and stay out of any conflicts amongst the world powers.

We request all foreign nations to respect the sovereignty and the unity of our nation when conducting relations with our nations.”

President stated that they give their fullest commitment to achieve the Sustainable Development Goals of the United Nation.

“Just as the example set during our election campaign, we will continue to carry out policies against plastic and polythene in our administration as well”, the President said.

President Gotabaya Rajapaksa stated that he will not hesitate to use his executive powers for the benefit of the country.

The newly elected President said that he will establish a new government that can work according to his policies.

I call on all patriotic Sri Lankans to join me in building a prosperous nation for the future generation”, concluded President Rajapaksa.