I will never compromise on national security – President 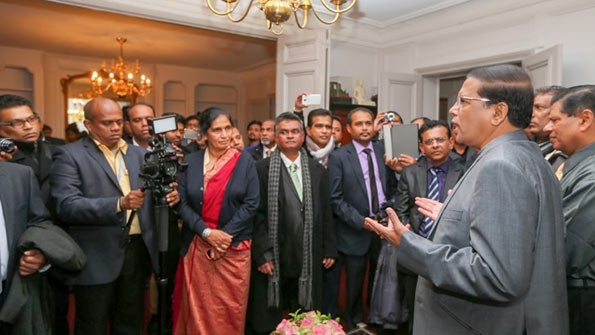 President Maithripala Sirisena said that he loved Sri Lanka as much as or even more than any other Sri Lankan and wowed that he would never compromise of national security under any circumstance. He said this at a meeting with the members of Sri Lankan community in France at the Embassy of Sri Lanka in Paris on November 29.

The representatives of the Sri Lankan community asked about allegations that some actions of the government could adversely affect the national security and the President replied that he was totally committed to the safety, security and integrity of Sri Lanka and he would never allow anybody to take any action that could be affect the national sovereignty or security.

President Sirisena said that the government succeeded in winning the support of the international community and added that the fact that he could meet three important leaders of the world, Prime Minister of United Kingdom David Cameron, Premier of Canada Justin Trudeau and Prime Minister of Australia Turnbull in a short time span of 12 hours at the sidelines of the Commonwealth Heads of Government Meeting in Malta yesterday (Nov 28) is an example of the international goodwill towards Sri Lanka.

He urged the dispora representatives to extend all possible help to Sri Lanka for the development activities of the government.

About 50 office bearers of Sri Lankan associations and Paris branches of political parties including the SLFP, UNP, JHU and DP participated in the meeting.

Home » I will never compromise on national security – President