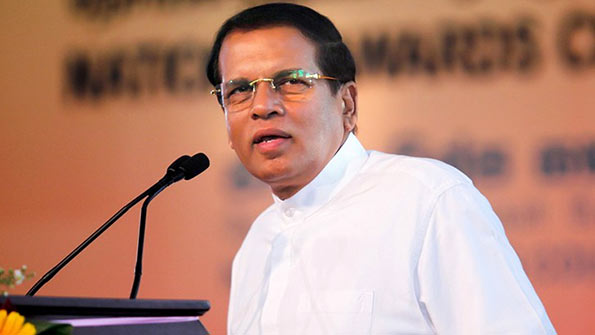 President Maithripala Sirisena says he would not allow anybody who embraces alien cultures and give higher values for them to destroy the greatness of the motherland and our proud culture.

“I undertook the leadership of this country on January 08 with the objective of handing down a good and developed country for the future generation by safeguarding the culture and values with a proud history of thousands of years” he said.

The President made these remarks at the ‘Shilpa – 2015’; National Handicraft Award Ceremony held yesterday (Dec.29) at ‘Ape Gama’ premises in Battaramulla.

“To make the dream for rising as a great and valued nation by safeguarding our thousand years old proud culture, we should give higher significance for our values and heritage”, the President said.

“The ideas I expressed regarding the musical show of a foreign singer, are now being used to disgrace me in the internet. Those who are doing this should remember that they are destroying their own proud culture and the pride of a great nation”, the President further stated.

The highest value of our culture is when it can be more powerful than the Law, the President said.

“All must unite in brotherhood to take our country forward to conquer the world through our innovative skills while protecting our heritage”, the President said.

The President presented awards to the winners at this occasion and two award winners presented their creations to the President.

A special memento was presented to the President during the ceremony.

Minister of Industry & Commerce-Rishad Bathiudeen, State Minister-Champika Premadasa, Secretary of the Ministry- P.M.K.P Thennakoon and others participated in this event.