I won’t bow down to conditions – Sajith 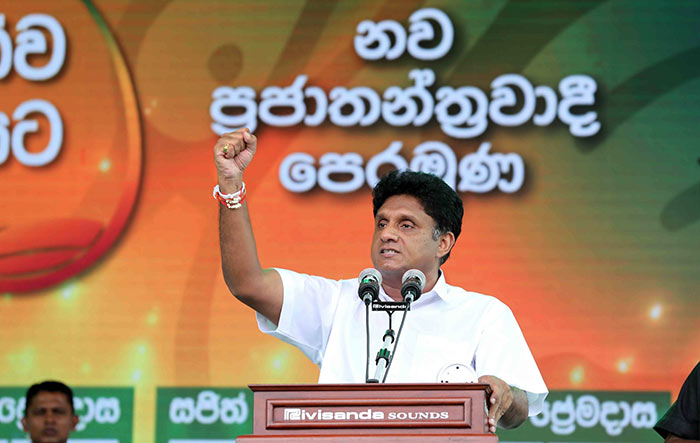 Presidential candidate of the New Democratic Front Minister Sajith Premadasa says he will not bow down to any conditions put forth by politicians in a bid to gain votes.

Speaking during a programme in Kandy, Minister Premadasa said he will never trade his candidacy to garner additional votes.

The Minister claimed several political parties are attempting to sell their political power by tabling conditions in order to forge ahead in the political sphere.

He reiterated he will not trade his candidacy for any condition, in any manner, with any faction.

Minister Sajith Premadasa further noted he will provide a leadership which takes direct decisions and prioritize skills, for the country.

Minister Premadasa said he accepted the candidacy without agreeing to any terms, adding therefore he has the freedom to act according to his will within the candidacy.

He added no one has imposed restrictions on him.

While stating that he will not engage in a weak political journey, based on conditions and be a slave to any group, Minister Sajith Premadasa said he will be transparent and express opinions.

The Minister said he has commenced a new, straightforward journey, void of nepotism and close associate groups, and which has room for skills and talent.

1 Response to I won’t bow down to conditions – Sajith

Home » I won’t bow down to conditions – Sajith