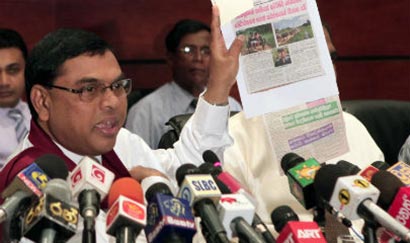 Minister of Economic Development, Basil Rajapaksa at this media briefing said that an IMF study had predicted that Sri Lanka would remain as the second best performing economy in the world next year, after China.

The minister said that war-torn countries such as Vietnam, Germany, Japan and Korea had taken many years to return to normalcy while Sri Lanka,just two years after the war, was able to be among the top four economies in the world with an economic growth rate of around 8.3 percent.

He further said that last budget provided so many incentives for investors to start businesses in cement, steel, iron, manufacture of drugs and other similar ventures in order to bridge the export and import gap which is in existence due to dependency on essential items that could be manufactured in Sri Lanka.

Due to global recession investors were prompted to save money last year and this year they are likely to invest and this would open opportunities to Sri Lanka.

The Minister added that the government had decided to increase the number of home economic units for each Grama Niladhari division from 15 to 25 in 2012.

Addressing the media, Secretary to the Treasury Dr P B Jayasundera said that the country is on the right economic path and this was the reason for global giants like Holcim, Nestle, Shangri-La, Dialog Axiata to reinvest in Sri Lanka.