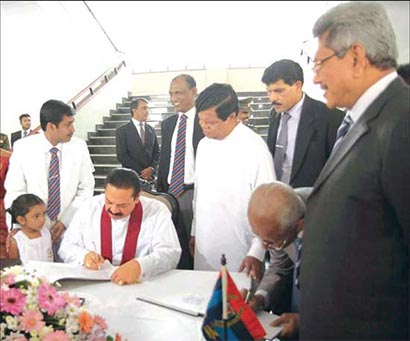 The President opened the new five storeyed building at the Defence Service College which was commenced on a concept of Defence Secretary Gotabhaya Rajapaksa five years ago, by cutting a ribbon at the auspicious time of 10.31 am amid chanting of pirith by the Maha Sangha.

President Rajapaksa after unveiling the commemorative plaque admitted four students to grade one of the college. The four students were children of Security Forces’ personnel representing the Army, Navy, Air Force and Police.

The President inspected the class rooms of the new building and visited the educational exhibition at the college premises.

After officially launching the FM DSC radio, the President posed for a group photograph with students and staff members of the college. The newly opened building is equipped with facilities for students from grade six to Advanced Level. It consists of a laboratory and a computer laboratory. The Defence Service College also has a library, swimming pool, gymnasium and many other facilities for extra curricular activities. The objective of establishment of the Defence Service College is to see that the children of war heroes become citizens by enjoying the new freedom and become citizens suited to the 21 st century.