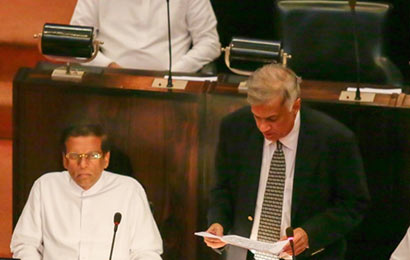 Prime Minister Ranil Wickremesinghe yesterday stated that as there was a serious defect in the process of impeachment moved in Parliament against Chief Justice Shirani Bandaranaike, her removal by former President Mahinda Rajapaksa was totally illegal. He also stated that as the process of impeachment was flawed and the removal was illegal, Shirani Bandaranaike was not considered removed from the post of Chief Justice, and the appointment of Mohan Peiris is illegal and considered invalid.

The Prime Minister further said that the Speaker had acted as per House rules with the motion moved in Parliament and the debate was held accordingly, but, the President’s Secretariat had to determine if the resolution was an impeachment.

He added that the President’s advisers had to instruct the President he had two options, to decide if it was not based on a proper impeachment and to send it back to Parliament for amendments.

Or, the second option was to amend the Standing Orders. He added that it seems that the adviser to the President had the need to sit in the office which fell vacant. He said neither the Speaker nor the House had made any mistake in this matter at hand. The Prime Minister quoting the motion said that, at the end of the motion included in the order paper on November 6, 2012 it was stated, “The aforementioned Members of Parliament resolve that a Select Committee of Parliament be appointed in terms of Article 107(3) of the Constitution read with the provisions of Article 107(2) and Standing Order 78A of Parliament enabling the submission of a resolution to the President for the removal of Dr. Shirani Bandaranayake from the office of the Chief Justice of Sri Lanka in the event the Select Committee reports to Parliament that one or more of the charges that have been levelled been proved after the aforesaid charges of misconduct have been investigated.”

The Prime Minister further stated that however the same content was included in the motion on January 11, 2013 when the motion was taken for debate. The resolution of the House on the same motion was sent to the President in writing.

Prime Minister Ranil Wickremesinghe made this observation yesterday in response to a statement made by the Opposition Leader under Standing Order 23(2) and Point of Order made by Parliamentarian Dinesh Gunawardena. The Prime Minister further said that he also would recall the incident that took place on the day of the Presidential Election. “I went to Temple Trees on January 9 at 4 am on the request of the then President Mahinda Rajapaksa. He stated when he went to Temple Tree, Mohan Peiris was there. He said the Attorney General told him later that Mohan Peiris was at Temple Trees at 2.30 am at the time the Attorney General went there to give the President legal advice. The Prime Minister further said Mohan Peiris later telephoned him and said some groups attempted to remove the CJ from office. He expressed his wish to extend his support to the government as the Chief Justice. The Prime Minister said the Chief Justice asked for an appointment to discuss the matter to which he answered that he would given be given an opportunity to talk with the President and himself. He invited Thilak Marapana for the discussion.

The Prime Minister said Mohan Peiris came to meet him with his wife and two doctors. At the discussion, Mohan Peiris said that it is better if the Executive and the CJ work together. Prime Minister Wickremesinghe said that he told to Peiris that he would discuss with the BASL and inform its opinion to Peiris.

He added that the BASL had passed a resolution. The BASL was concerned about Mohan Peiris’ presence at the Presidential candidate’s residence on January 9, 2015. The BASL confirmed my doubts about stating that it was not fair by the CJ to be seen with a Presidential candidate at that moment in time. The Prime Minister further said Mohan Peiris’ name is connected with several companies like Rakna Lanka Pvt Ltd and Lanka Logistics Company.

Under these circumstances, the President in keeping with the Constitution, the National Executive Committee and the Attorney General, stated that the correct measure would be to inform Mohan Peiris that the appointment made by the former President is null and void. The President also informed Shirani Bandaranayake to resume duties as the Chief Justice. According to Section 119(2) of the Constitution, the judgments issued during the period when Shirani Bandaranayake was not in office are considered as judgments issued by the Supreme Court.