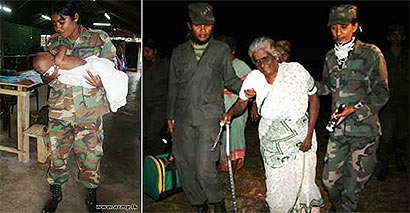 We have short memories and five years on how many still remember the humanitarian rescue operation? Those that laugh and sneer at the rescue may like to ask would the LTTE do the same? The truth is bitter to swallow. These Tamils begging for water and food, looking as if they had not eaten for weeks were afterall relieved to have been saved from ‘their sole representative’. How many Tamils even non-Tamils viewed LTTE as their hero? If so what is their answer for the pictures below. The truth is these Vanni Tamils are ‘Nobodys Children’ – They are used by Tamil politicians. They were used by the LTTE and other Tamil militant groups and they are used by the NGOs/INGO and other activists to lobby against Sri Lanka. None of them however, have given anything to uplift their welfare. They were only used and meant to be used. It is a case of all Tamils against them!

Our questions for the TRO, the Tamil Coordinating Committee, the British Tamil Forum, the World Tamil Movement, the Canadian Tamil Congress, the Australian Tamil Congress, the Global Tamil Forum, the National Council of Canadian Tamils, the Tamil National Council, the Tamil Youth Organization, the World Tamil Coordinating Committee, the Tamil Eelam People’s Assembly, the World Tamil Relief Fund, the Transnational Government of Tamil Eelam all now proscribed as foreign terrorists under UNSC Resolution 1373, most of whom established their organizations after the elimination of the LTTE but were linked under various other names is….

SHOULD WE NOT PAY MORE GRATITUDE TO THEM?

The Defense Ministry should erect a permanent public display of these pictures capturing the effort taken by Sri Lanka’s Armed Forces to assist scores of Tamils denied food, water and lifeless to even go against the LTTE during the last phase of the war. All foreign dignitaries must be taken their and a Guest Book will help tabulate the thoughts of all visitors.

The Sri Lankan Nation must stand up against the lies.