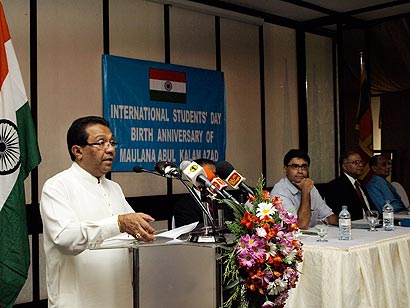 The High Commissioner of India for Sri Lanka Ashok K. Kantha said that India and Sri Lanka are not just friends but relatives and underscored that India has always believed in sharing her achievements with neighboring countries specially Sri Lanka. He made these remarks at the reception held at Hotel Taj Samudra to celebrate the International Students’ Day on 30 March.

The High Commission of India organized the reception not only to celebrate the International Students’ Day but also to commemorate the birth anniversary of Maulana Abul Kalam Azad Muhiyuddin Ahmed, reputedly known as Maulana Azad., the first Education Minister of independent India. Minister of Higher Education S.B. Dissanayake graced the occasion as the chief guest.

Delivering the key note speech at the ceremony, Minister Dissanayake said that as a nation with qualities and values, the Indian government is celebrating his birthday as ‘National Education Day’ across India giving him due recognition for his contribution towards establishing the education foundation of India. He further lauded the many achievements of Maulana Azad highlighting his critical role in settling up of the famed Indian Institute of Technology which has made it possible for India to become one of the leading hubs of technology in the world. In his remarks the Minister also made a special mention of the close civilizational and educational linkages between Sri Lanka and India since many centuries.

The High Commissioner of India also said that India is in the process of more than doubling the available number of scholarships as well as adding new scholarships for the students of Sri Lanka. He said that the Alumni were a source of pride to India and an invaluable asset in promoting the bilateral relations and added that they are virtual ambassadors of India in Sri Lanka.

A short cultural programme was also presented by the Indian Cultural Centre on this occasion. Sri Lankan Alumni of Indian educational institutions attended the reception in large numbers.

Full text of the speech delivered by S B Dissanayake, Minister of Higher Education, as follows

First of all I wish to thank His Excellency, Mr Ashok K. Kanth for inviting me, for this prestigious occasion, the commemoration ceremony organised by the Indian High Commission and the Government of India.

Today we are here to celebrate the birth anniversary of the first Indian Education Minister, Honorable, Maulana Abul Kalam Muhiyuddin Ahmed, who is reputedly known as Maulana Azad. He was an Indian Muslim scholar and a senior political leader of the Indian independence movement. Maulana Azad is remembered as amongst the leading Indian nationalists of his time. His firm belief in Hindu-Muslim unity earned him the respect of the Hindu community and he still remains one of the most important symbols of communal harmony in modern India.

Following India’s independence, he became the first Minister of Education in the Indian government. Maulana Azad was an enthusiastic supporter of Gandhi’s ideas of non-violent civil disobedience. Maulana Azad committed himself to Gandhi’s ideals, including promoting Swadeshi (Indigenous) products and the cause of Swaraj (Self-rule) for India. He became the youngest person to serve as the President of the Indian National Congress.

As India’s first Minister of Education, he emphasized on educating the rural poor and girls. As Chairman of the Central Advisory Board of Education, he gave thrust to adult illiteracy, universal primary education, free and compulsory for all children up to the age of 14, girl’s education, and diversification of secondary education and vocational training.

Addressing the conference on All India Education Maulana Azad emphasized, “We must not for a moment forget, it is a birth right of every individual to receive at least the basic education without which he cannot fully discharge his duties as a citizen.”

He oversaw the setting up of the Central Institute of Education, Delhi which later became the Department of Education of the University of Delhi as a research centre for solving new educational problems of the country. Under his leadership, the Ministry of Education established the first Indian Institute of Technology and the University Grants Commission, an important institution to supervise and advance the higher education in the nation. He also laid emphasis on the development of the Indian Institute of Science, Bangalore and the Faculty of Technology of the Delhi University. He foresaw a great future in the IITs for India: he emphasized that,

I have no doubt that the establishment of this Institute will form a landmark in the progress of higher technological education and research in the country.”

It is very interesting to see that his predictions have come true in India. Now we can see that India has become the one of the leading hubs of technology in the world. Their IIT’s are lined parallel with world renowned IIT’s. The entry to these institutions is so competitive.

Jawaharlal Nehru referred to Maulana Azad, as the caravan leader, “a very brave and gallant gentleman, a finished product of the culture that, in these days, pertains to few“.

“The Emperor of learning” remarked Mahatma Gandhi about Maulana Azad counting him as “a person of the caliber of Plato, Aristotle and Pythagoras.”

I have given this brief note on this great personality of India to make you, and especially to this young crowd to realize that neither there are religious barriers nor cultural barriers to make great personalities.

There may be rains of criticisms and insults for good work but we should never take our steps back. We have many things to learn from these outstanding personalities. As a nation with qualities and values, the Indian government is celebrating his birthday as National Education Day across India giving him due recognition for his contribution towards establishing the education foundation of India.

Today we are here to celebrate this prestigious event. Following the path of many great personalities in India, Indian government is awarding scholarships to people, local as well as abroad annually. Sri Lanka is one of the countries who got the privilege of receiving large number of scholarships from the Indian government for many years. I am aware that many of those who are privileged by these scholarships are present at this gathering.

Not only scholarships, the Indian government is helping us in many ways in many more sectors. It is noteworthy to mention here that currently they are helping us in rebuilding the universities in the North and Eastern provinces of Sri Lanka. The forthcoming Engineering faculty of Jaffna is a classic example. I am not hesitating to express our difficulties to our friendly neighbour and share our concerns with the government of India. The recent discussion which we had with the Minister of Education of India resulted in supporting us in providing fleet of passenger busses and jeeps to minimize the burden of transport facility difficulties in our higher education system. We are very grateful to the Indian Government.

I wish to remind the need and necessity of these facilities and to focus the authorities to make it happen in the near future for the benefit of our undergraduates. This will greatly facilitate new reforms in higher education. Providing infrastructure for demanding areas is one of the biggest challenges which we face at present especially with the development of Higher education sector in par with international standards. I am in a firm belief that the smooth running of the unending relationships between our countries has been continuing for years due to the trustworthiness of the two governments and the two leaders.

Adding an icing to the cake, the visionary leader of our government, His Excellency the president, Mahinda Rajapaksa has decided to offer 100 scholarships to other countries who are having very close relationships with Sri Lanka. This will be the first of its kind happening in the history of Sri Lanka. I am pleased to state that out of these scholarship’s majority will be awarded to the Indian government. I am proud to mention here that the decision has already made by His Excellency the president.

We are talking about long-standing international ties between two of our countries. I wish to add more valuable inputs to strengthen our relationships not merely as international interactions but as a common virtual nation. When I read bio-geographical history and pre-history of Sri Lanka, I strongly feel that I am an Indian.

Our two land masses, India and Sri Lanka were together for many long years. Lord Buddha visited Sri Lanka three times but no any sea routes or air routes were documented to describe these visits. We are intricately bounded to each other. The origin of our civilization sprouts up from Indian influence that is ARYANS influence. The way we eat; the way we talk; the way we behave; all are more or less equal. If we go to Kerala in South India, we never can differentiate the two nations; even the appearances of people are very similar.

I wish to note that the scientific evidences clearly show these affinities. For instance, if we consider distribution of faunal and floral elements this is clearly evident: It is known that bio-diversity of Westen Ghats and Sri Lanka is very similar. In fact in the global arena, Western Ghats of India and Sri Lanka are considered together as a ‘hotspot’ of biodiversity. I believe that when come to human beings there want be much differences.

Research is now being carried out in Sri Lanka to understand the genetic relationships of our people. Can’t we extend this research to India to find out the real affinities of ours?

There are many avenues for us to join together. There are prestigious institutions, such as Indian Institute of Science in Bangalore, for us to start collaborations. It is the right time to start collaboration with this particular institution. Why it is important? This together will result in a long journey of scientific communities. I must remind you that Hon. Maulana Azad is the founder of this well-known Indian Science Institute in Bangalore. So, why not we think of possibilities to start common research?

In summary, these facts make me to think that origin of our forefathers is Indian without exaggeration. The large numbers of recipients of scholarships from India, who are present here today, adequately demonstrate the nature of the educational co-operation.

The Ministry of Higher Education, which administrate the program of educational co-operation, wish to express sincere thanks again to the government of India for her support, with which Sri Lanka can further enhance its human resources. Our country is rich in many resources but it needs educated and trained men to develop and utilize her resources properly for the benefit of the nation.

That is one of the main tasks of mine and the Higher Education sector today. 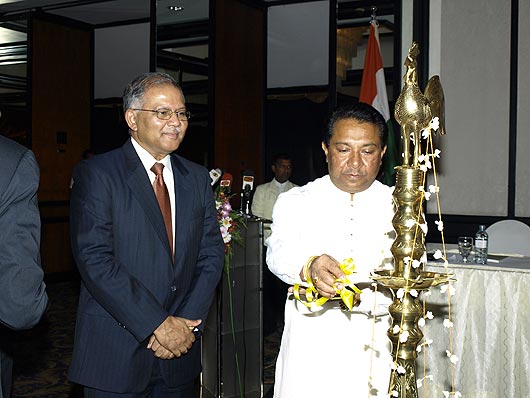 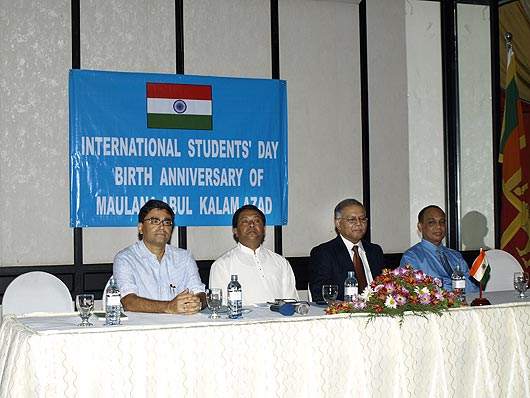 1 Response to India and Sri Lanka are relatives, not just friends says Indian HC in Colombo