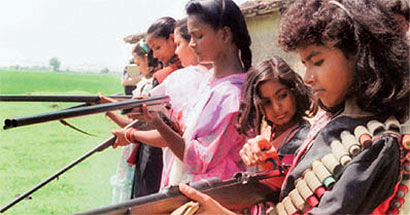 The Asian Center for Human Rights has released a comprehensive report but media has jumped on the title alone.

We are well aware of the insurgencies across India – in Kashmir, Maoists (Naxalites) recruit one member from the Adivasi family, probably taking lessons from LTTE. There is no reason not to doubt that many of the LTTErs who fled to Tamil Nadu during the final phase of the war and were given a garland welcome may be providing training in a case of chickens going back home to roost. LTTE was afterall trained in India.

Human Rights organizations, the UN with its child soldier reports are all prepared to come down hard on India. A diversion from the Sri Lanka onslaught. It just goes to show that Indian sepoys are likely to take India down the precipice. There are no Subash Chandra Bose’s in India now!

The question is does the Indian Government recruit children?

So far as the Indian Army recruitment goes a person who is 16 ½ years is eligible for technical recruitment while to join as a soldier an Indian has to be18 years.

However, the Asian Legal Resource Centre and the Conflict Study Center both say that the “State” and “insurgents’ recruit children.

We know the difference in accusing and actual evidence to prove the accusation. But accusations are often galore and hardly any evidence follows but when the internet is flooded with ONLY accusations everyone believes the versions without taking any effort to find out or verify its authenticity.

If the Indian Government is guilty there is enough of ways to take action.

If it is the insurgents what does the world expect the Indian Government to do? Like Sri Lanka was made to call up terrorist murderers to a negotiating table in international presence and use the politest of words, ask the LTTE not to recruit children and shake hands. Goodbyes are over and LTTE returns to recruit more children! UN Representative Olara Otunu will be able to give a good picture of how genuine LTTE’s promises were.

This is exactly the problem. Is recruiting child soldiers really a problem outside of the international leverage that it brings at political levels? If so, unlike in Sri Lanka’s case where for 30 years apart from reports getting compiled and international representatives coming to Sri Lanka given that the UN Special Rappateur was a Sri Lankan Tamil – absolutely NOTHING happened to stop children from being recruited. In fact, the increase in child recruitment took place after the 2002 infamous ceasefire heralded by the word.

Thus if child soldier recruitment is the issue, India needs to be asked to come down on the insurgents and quell these insurgents movements in toto. Now that solution we know is out of the question because the insurgents working all round India are not using stones and sticks but real arms and ammunition. So where do they get these arms to fight the Indian army, who funds them and what is the deal they have? India would be insane to be funding arms to fight its own army!

Therefore, all these child soldier reports are only worthwhile so long as the world authorities stop shedding crocodile tears and seriously address the issue if they are actually concerned about these children. There are enough of conflicts all round the world where 300,000 children take part as child soldiers. If there was sincerity these numbers would not be increasing annually with no signs of ending and the report compilers hit the international news headlines and secure more funds for their agency – children however continue to get recruited.

Who will change this status quo?

4 Responses to India has 3000 child soldiers!