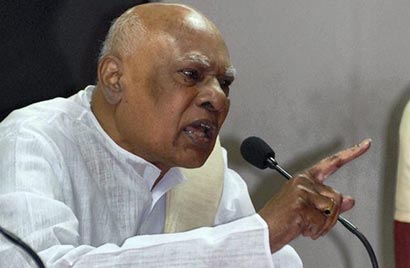 CHENNAI: Tamil Nadu governor K Rosaiah on Friday urged the Indian government to impose economic sanctions on Sri Lanka and take steps to ensure that those displayed by the ethnic conflict there returned to their original homes.

Delivering his address on the first day of the first assembly session of 2013, Rosaiah said: “I reiterate the resolve expressed by the Tamil Nadu assembly June 8, 2011 to urge the Indian government to initiate action by working with other nations for imposition of an economic embargo on the Sri Lankan government till the Tamils living in camps are resettled in their own places and are allowed to live with dignity, self-respect and equal constitutional rights on par with the Sinhalese.”

According to him, the rehabilitation measures taken by the Sri Lankan government were not at par with the expectations.

Referring to the attacks on Indian fishermen by Sri Lankan security forces, Rosaiah said: “The fishermen of Tamil Nadu, who earn their livelihood in their traditional fishing areas of the Palk Bay region, are victims of repeated harassment and murderous attacks by the Lankan Navy.”

He said the Tamil Nadu government was anguished at the harassment of Indian fishermen by the Sri Lankan Navy while the Indian government showed “utter disregard” to their woes.

Tamil Nadu chief minister Jayalalithaa has emerged as a trenchant critics of the Sri Lankan regime for among other things the mass killing of Tamil civilians in the ethnic conflict that ended in May 2009.

The Sri Lankan military, which vanquished the Tamil Tigers, has repeatedly denied the charge.

The governor also voiced concern that Tamil Nadu’s food production would be hit due to Karnataka’s refusal to release Cauvery river waters.

Rosaiah said the farmers in Tamil Nadu had been affected. The farmers will be compensated as per the recommendations of the committee set up for this purpose.

He said the government would approach the Supreme Court seeking compensation for the crop loss from the Karnataka government.

Stressing that it would be difficult for the central government to implement the direct cash transfer scheme, Rosaiah said the scheme should be implemented through the state government.

With Kamal Haasan’s mega “Vishwaroopam” courting controversies and the government imposing a 15-day ban on its release, Rosaiah urged film makers to show respect for sensibilities of people.

Rosaiah said the government would take “severe action” against those who try to whip up communal passion.

Earlier, legislators belonging to the DMK walked out citing power cuts and the Cauvery water issue.