India the top team but not the best host 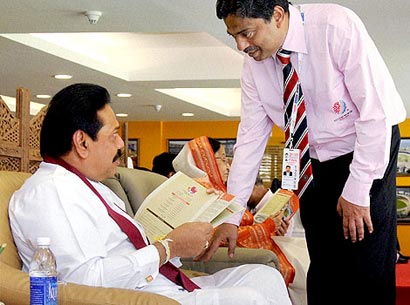 Three days after the World Cup final, officials from Sri Lanka are not happy with the level of courtesy extended to their President Mahinda Rajapaksa during his trip to Mumbai to watch the final.

Though no official complaint has been lodged with the Indian government, they have informally conveyed their displeasure at limited tickets made available to Rajapaksa’s entourage, and at the refusal let him meet the teams before the start of the match.

Rajapaksa had decided to come to India for the final after Sri Lanka’s semi-final victory over New Zealand in Colombo.

A request for 40 tickets was made to the BCCI through the Indian High Commission in Sri Lanka.

Around the same time, the cricket board got another request for 36 passes from Rashtrapati Bhawan for Indian President Pratibha Patil and her group.

“Since it was not possible for us to accommodate everybody at such short notice, we made 10 passes available to both the leaders in President’s Box at the stadium,” BCCI’s Chief Administrative Officer Ratnakar Shetty said.

“Since the Indian President is from Mumbai, we made another 20 passes available to her at the Garware pavilion. As for the Sri Lankan President, we could offer him only 10 additional passes in the Garware stand.”

Board officials said that since they were aware that Sri Lanka’s Sports Minister CB Rathnayake had purchased 40 tickets for the Garware stand a few weeks ago, they advised the Presidential entourage to use some of the seats blocked by him.

“In addition to that, I believe the Sri Lankan board president bought 10-15 more seats in the Vithal Divecha stand. But there was no problem,” Shetty said.

A senior official of the Maharashtra government said the Lankans were also upset because Rajapaksa’s request to meet the Sri Lankan players before the start of the match was denied at the last minute.

In the India vs Pakistan semi-final in Mohali, both Pakistani Prime Minister Yousuf Raza Gilani and Indian PM Manmohan Singh had the teams before the match began.

Consul-General Samaratunga said that a meeting with the players was scheduled in the President’s programme, but was later changed by Indian authorities.

Further, Rajapaksa was not allowed a picture opportunity with the winning Indian after the final.

When contacted, an MEA official in New Delhi said that Rajapaksa had not been invited by India, he had himself asked to come over.

In Mohali, Gilani was our guest. That’s why he was taken on the field to meet the players. “If there was no on-the-field interaction in Mumbai, it could be because of protocol issues.”

When contacted, the Sri Lankan High Commissioner to India, Prasad Kariyawasam, confirmed that no complaint had been lodged with the Indian government on the issue, the Mumbai Mirror reports.

Home » India the top team but not the best host