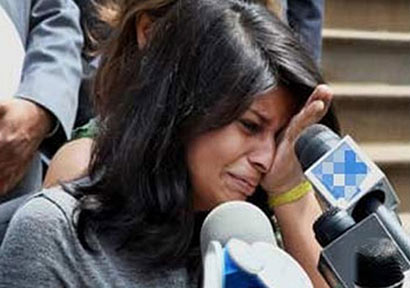 Firstly, what must be said is that if Devyani Khobragade did wrong whether she is an American, an Indian or a diplomat a wrong is a wrong. Both India and Ms. Khobragade has to accept this. Therefore, the question of her innocence is not what is being argued. What is under discussion is for forging a document did the Indian diplomat have to be strip searched, cavity searched and DNA swabbed. How does stripping clothes of a diplomat have anything to do with a forged document? Given that the authorities decided to arrest because they had sufficient proof all that needed to be done was to arrest her, inform the Indian mission and question her, charge her and send her back. If every person arrested in the US are privy to this type of high standards of US human rights treatment, India in cahoots with US drawing resolutions together should really have nothing to complain about. We do recall the human rights nods that other allies of the US received – Gaddafi was dragged out of sewer and killed ‘humanely’, the US President and entire Military watched unarmed Osama being murdered, Saddam had his tooth plucked out with virtually the whole world watching and then a kangaroo court tried him and he disappeared – so with India proud of being an ally, it has nothing really to complain about. Now that the video of the diplomats strip search has been released and the entire world is privy to the high standards of human rights treatment US demands other nations to follow, all we can say – No thank you, our ‘uncivilized’ methods look far nicer than the way the video shows how even diplomats are treated.

In 2012 the US Supreme Court ruled that officials may strip-search people arrested for any offence however minor. So that rests our argument about Devyani’s forged document warranting a strip search! In the US people may be strip-searched after arrests for driving without a license, failing to pay child support, driving with a noisy muffler, failing to use a turn signal or even riding a bicycle without an audible bell. Even a nun had been strip-searched for trespassing during a demonstration. Even an 85 year old granny had been strip searched! This means minor or major – strips searches are allowed in the US. That leads us to the next question was George Zimmerman accused in the murder of black youth Travyon Martin also strip searched… not really and he was found ‘not guilty” of the murder too. There you have US justice!

Here is the video of the search which is going viral through social media. US says the video is a hoax and if so it just shows that the US has got a taste of its own medicine – lying over social media! http://www.youtube.com/watch?v=qjcQwuhcnmg

What needs to be said though is that even if the person on video is not the Indian diplomat it shows all viewers how they are likely to be treated in the US if arrested whether guilty or not. This is why New York City Defense Attorney Ron Kuby said “Everybody is treated in exactly the same disrespectful, casually brutal and arrogant fashion.” This is how human rights happens in the US of A.

This is the official chargesheet against the Indian diplomat http://www.justice.gov/usao/nys/pressreleases/December13/KhobragadeArrestPR/Khobragade,%20Devyani%20Complaint.pdf

As for India, woken up from being mesmerized by America’s ‘ally syndrome’ India’s reactions to the treatment of its diplomat was to retrieve all IDs of US diplomats in India, demand salary details of Indians working for US diplomats and families, removing the barricades outside the US embassy, ordering the cessation of any commercial activity inside US embassy compound, closing the Embassy Club to non-diplomats, downgrading privileges for US diplomats,

What India could also do is to run the video over every foreign Mission / in the EU parliament and even the UN General Assembly and bring up the treatment of people by the US or better still why not hand over the video to C4 and ask their expert who can look at a photograph and say exactly who the criminal is without even looking at any evidence. There are scores of people being paid to lie and they are receiving global awards, speaking on stages and invited as panelists take it to them and get their ‘expert opinion’

When India’s External Affairs Minister Khurshid says “we expect a friendly country like the US to what a friendly country does’ – surely he could not have forgotten what happened to America’s one time friends Osama, Gaddafi, Saddam, Noriega and scores of other leaders… so who is Devyani Khobragade to be given treatment that the US did not give these leaders!

India is insisting on a formal apology from the US and the withdrawal of the charges – but what happened to Devyani is just standard procedure in the US. This however, means that India would gain a leverage politically over the US and if that is the direction that India should exert pressure, India must now realize that the incursions by the US into Asia is going to be a very dangerous scenario in time to come whether US comes in as a friend or not.

India must now decide which direction India wishes to take geopolitically and in the interest of the entire region. However, modern Indian servility has become a bane to India. A handful of Indian ruling elite are so mesmerized in ‘belonging’ to the West’s ‘inner circle’ that are creating for India the exact replica of what happened to Yugoslavia. It is a matter of time that India will become balkanized and it has itself to blame for in going behind the West it has jeopardized its own territory and distanced itself

For the rest of the world watching the theatrics taking place we have to wonder whether any of it is being stage managed given that we are well aware of the lies, false flags and hypocrisies taking place.