India’s support for US resolution would backfire: Swamy 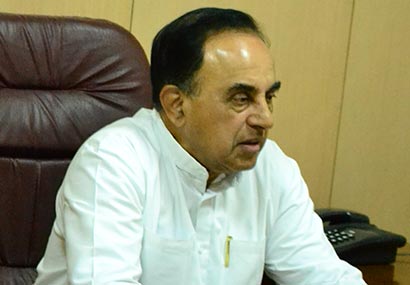 The Janata Party leader today said India should not join human rights groups at a UN meeting in passing a “one sided” resolution condemning Sri Lanka for alleged human rights violations during its war against the LTTE.

India’s participation in the resolution would make it vulnerable to similar resolutions over Kashmir or Manipur; Swamy said and suggested that it should urge Sri Lanka to devolve power so as to meet the legitimate aspirations of Lankan Tamils.

“The Indian Government should not succumb to the machinations of human rights groups in the UN Human Rights Commission’s meeting in Geneva by supporting an ill-advised resolution condemning Sri Lanka for alleged human rights excesses in its war against the LTTE terrorists,” Swamy said in a statement.

He also said the proposed resolution completely ignored the excesses committed by the LTTE.

“The resolution is one sided and appears to have deliberately suppressed the horrendous human rights excesses committed by the LTTE over the last 20 years,” the Janata Party chief said. “Support for such an adventurous resolution will make India vulnerable to future resolutions on Kashmir and Manipur for which extremist forces are already active in seeking to discredit the Indian government,” he added.

Swamy suggested that the Indian Government with the help of US and China should urge Sri Lanka to decentralise power to meet the legitimate aspirations of the Tamils.

“India may seek to bring a compromise resolution after consultation with the US and China to urge the Sri Lankan President Rajapaksa to devolve power by constitutional amendment to meet the legitimate aspirations of the Tamil citizens of Sri Lanka,” Swamy said.

5 Responses to India’s support for US resolution would backfire: Swamy

Home » India’s support for US resolution would backfire: Swamy