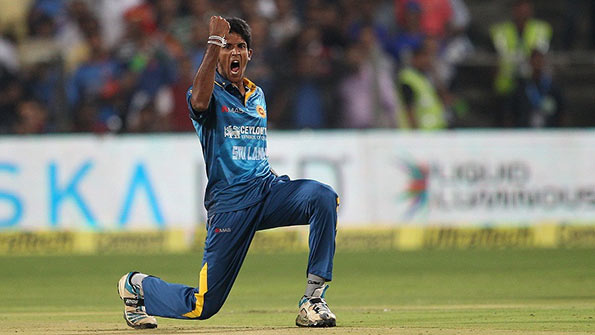 PUNE: An inexperienced Sri Lanka side shocked favourites India to win the first of three Twenty20 Internationals by five wickets at Pune on Tuesday and take a 1-0 lead in the three-match series.

Making full use of a seaming and bouncing green top Sri Lankan seamers bowled India out for 101 in 18.5 overs and then knocked the runs off with two overs to spare losing half the side.

The match winner for Sri Lanka was debutant fast bowler Kasun Rajitha who got his team off to a great start with two wickets in his first over sending back the inform Rohit Sharma (0) and Ajinkhya Rahane (4).

Rajitha also picked up the wicket of Sikhar Dhawan (9) to finish with figures of three for 29 and take the man of the match award on his debut.

Supporting Rajitha were the other two seamers Dushmantha Chameera (2/14) and Dasun Shanaka (3/16).

The star-studded Indian batting line-up was shredded to pieces by the young Sri Lankan pacers especially Rajitha and Shanaka, combining for a one international match prior to this fixture. They shared six wickets to send India packing to a lowly 101, their third-lowest total in the format.

The inexperienced Sri Lankan pair hit right lengths on a lively Pune surface, limiting the opposition to 58 for 7, before a last-ditch effort from R Ashwin (unbeaten 31) provided some respect to the total.

On a seemingly fine surface to back on, the Indian batsmen’s shortcomings against the moving ball were exposed. India were left pondering over what hit them.

Sri Lanka began their run chase rather shakily losing Niroshan Dickwella in the first over and his partner Danushka Gunathilaka in the fifth – both out to similar dismissals as they mistimed drives to Dhawan off Nehra.

However skipper Dinesh Chandimal (35) steadied the innings with another experienced batter Chamara Kapugedera (25) both adding a valuable 39 runs to the total to carry Sri Lanka to 62.

Following their dismissals Milinda Siriwardana took on the responsibility to finish off the game hitting Bumrah for a six and a four to remain unbeaten on 21.

Skipper Chandimal gave full credit to his bowlers. “They did a really good job. It’s a young team. Every time we tell them to back themselves and do what they are capable of. We miss a lot of senior players, the youngsters have put their hands up and grabbed the opportunity,” Chandimal said.

The second T20 will be played at Ranchi on February 12.