Information Technology in the Police Department – Need for reform 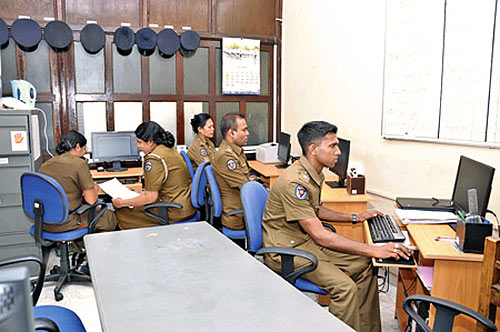 Out of curiosity, the writer looked at the website of the Police Department to find out to what extent the department was making use of information technology (IT) in its affairs, and was glad to find that a separate IT division has indeed been set up in the department as early as 1980, with a mission described as “to automate the Police functions through electronic data processing to meet the growing demand of Police requirements”.

The website further says that “Sri Lanka Police inaugurated the computerization process in 1980, at the Personnel Division to enter the Personnel data of existing man power. A short period after the commencement; a team consisting of twenty Police officers was selected as computer operators through a competitive exam. Thus, these twenty officers seconded to the Implementation & Progress control Division in the Police. These twenty officers became the pioneers with the establishment of the computer section of the Fourth Floor in the Police Headquarters in 1989. Subsequently, a permanent Computer Unit was established in 1990 in the Police Headquarters building at 5th floor. A separate division was formed as the IT Division which came into an operation in 1990. The division was brought under a retired senior DIG in 1996”.

The main objective of the IT Division is given as “to provide IT facilities to the Police functions as a support service”. This setup is headed by a Deputy Inspector General of Police and a Director responsible for the administration and maintenance of the computer projects. The total cadre is around 150 officers working round the clock, also 25 Inspectors under the command of Director/IT. The website says that currently among the staff in the IT division are nine DIGs and 12 SSPs, but does not say how many IT professionals (civil) are in the division; may be none.

As given in the objective statement, the IT facilities have been established to provide only support services to the department. Probably, the department uses IT facilities in its routine administrative functions and keeping track of finances and personnel data etc. But is it what is expected from IT facilities in the department? Can it handle exchange of information among all police stations to meet today’s requirements in the light of the current situation in the country? Can a team of uniformed officers plan and implement such activities? It is essential that the Police Department gets the services of a government IT service providing institution to draw up a plan for developing an information sharing system and strategies for its implementation.

The Police in its routine investigations and on special raids carried out on instructions of the IGP takes into custody a large number of individuals suspected of various criminal activities. They are then produced in a court of law and further remanded or released on bail. Upon investigations by the Police which may last from a few months to several years, cases are filed as directed by the Attorney General. After lengthy hearings which may last several years, most of them are released after finding them not guilty, thanks to the brilliance of attorneys whom they engage to appear on their behalf. According to the Police Statistics, in 2018, out of 36,213 cases recorded, only in 2030 cases the suspects were convicted. Does the Police maintain a database of all individuals taken into custody including their fingerprints which can be searched for comparison with forensic evidence collected on a later date?

A strong IT division is a pre-requisite of a successful intelligence service. It is said in media that on several occasions, information on anti-social activities of various groups of people have been brought to the notice of the Parliament and the general public, but with no action taken against such activities. The government justification for such no-action is that there is no legal provision to do so. Whether legal action was taken or not, the Police should have investigated these suspected activities promptly and reported to the authorities for immediate action. Such information collected should be fed to a central database maintained in the Intelligence Division for analyzing for any links to similar activities overseas. It is important that staff for the Intelligence Division should be specially recruited because for normal police service attributes looked for include brawn rather than brain.

If one walks into any Bank branch, every officer is seen to have a computer terminal on his desk from which he can access a customer’s account in another branch anywhere in the country and draw money from an account maintained at that branch. Even in the private sector, in all organizations having branches island-wide such as insurance companies, major consumer-trading companies etc, every such branch is linked to the head office through IT enabling sharing of information among them. Is the Police Department in a position to share information among all police stations in a similar manner? The website speaks of setting up a separate IT division in nineties, but even after two decades how many police stations are provided with an IT unit along with essential accessories such as a printer and a scanner? The website gives the e-mail address of a police station as <town-name@police.lk>. But, are all these e-mail systems functioning and how many times a day, is the e-mail read?

According to the Police website, only the main divisional offices have fax numbers, which means the individual police stations are not provided with even a fax machine. For transmission and receipt of information promptly, faxing is better than e-mailing because the latter is read only when the recipient opens the in-box (unless provision has been made to provide an alert on receipt of an e-mail), while in the former, the message gets printed instantaneously. Hence, it is essential that every police station is provided with a fax machine with a dedicated telephone connection having the facility of plain-paper printing for permanent record keeping.

If the police receive information on an individual suspected of a criminal activity including his photograph or of a stolen vehicle, the Police should be in a position to share this information among all police stations instantly enabling them to apprehend the suspect or the vehicle. If the Police does not have this facility, isn’t it time the Police acquire such capability, both by investing on necessary hardware and on building the necessary capacity among its staff which essentially should include civil IT professionals. It is important that the uniformed officers trained in IT should not be transferred to other divisions till they serve a minimum period in the division. Another important factor is that officers in the Intelligence Division should be adequately remunerated in recognition of their added responsibilities.

Home » Information Technology in the Police Department – Need for reform