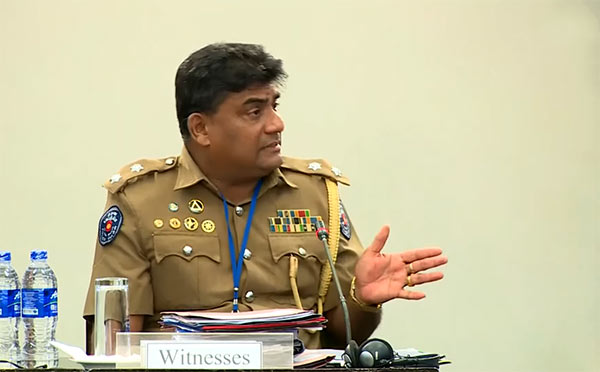 The Parliament Select Committee (PSC) probing the Easter Sunday carnage was told yesterday that prior intelligence reports on the terror attacks by Zahran Hazhim’s group had not been provided to the police station in the Kattankudi area, where the National Thowheed Jamaath (NTJ) operated from.

Testifying before the PSC, Kattankudy OIC IP Nishantha Kasturiarachchi said that he had not received any intelligence reports or warnings of the Easter Sunday attacks though such reports had been sent to other police divisions.

IP Kasturiarachchi said that Zahran, his brother Rilwan and another person known as Army Mohideen had been evading arrest. “They had fled the area by the time I assumed duties as the OIC of the Kattankudy police station. There was no information about them.”

Dr Senaratne: What action did you take to trace him? There were complaints against Zahran and his activities from the Muslim people of the area.

IP Kasturiarachchi: By the time that I assumed duties there was no information about his activities in the area. Zahran did not come there. If he had come, the people would have informed the police.

There was a case against 13 other persons and they were on bail. They belonged to Zahran’s group. There were charges against that group for engaging in violent activities and condemning other religious groups. They came to the police on the last day of every month to report there as per a court order.

Dr Nalinda Jayatissa: Were there any allegations that some police officers had links to Zahran and therefore they did not arrest him.

MP Sumanthiran: Is that case still in progress?

MP Sumanthiran: Why is that?

IP Kasturiarachchi: There is a report pending from the Government Analyst’s Department. On April 17, a person informed the police that a motorcycle had been set on fire on his land at Palamunai. We visited the site and found that the fire was a result of an explosion. The land was 43 acres in extent. The explosion might have been carried out the previous night.

We have arrested 64 persons who had links with the terror group of Zahran.

IP Kasturiarachchi: They did nothing of the sort in the Kattankudy area. They had done so in the Nuwara Eliya and Hambantota areas. Not in my area.

Dr Nalinda Jayatissa: Did you receive any complaints against Zahran and his group by other people during your time in the Kattankudy area.

IP Kasturiarachchi: No, there was a peaceful situation. There had been talk about a group engaged in prorogating extremist ideologies in the past. Zahran, Rilwan and Army Mohideen were no longer in the Kattankudy area. In February, 2019, too, our officers checked and reported that those persons were not there.