Intelligence units will be given power and ‘legal protection’ – Gotabaya 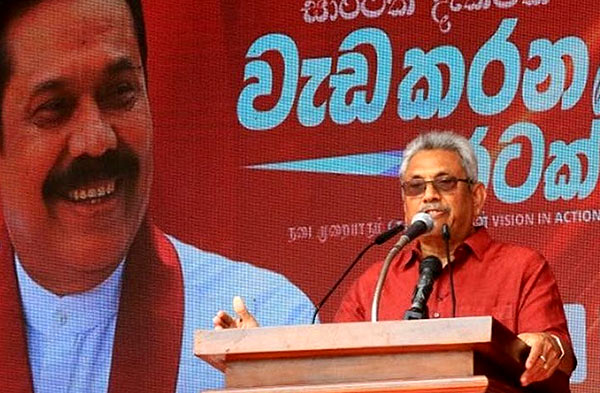 SLPP presidential candidate Gotabaya Rajapaksa says that the former government used the TID and the CID of the Police to find terrorists, but the incumbent government is using those agencies to ‘chase after political opponents’.

Speaking during a rally in Chilaw, the former Defence Secretary claimed that the government even attempted to arrest and imprison him under the Prevention of Terrorism Act (PTA).

“How can you get the person who ended terrorism under the Prevention of Terrorism Act?” he questioned.

Rajapaksa stated that if investigation into the murder of police officers in Batticaloa had been carried out properly, the Easter Sunday attacks could have been prevented. “Those are the things that the commission should have looked into,” he said.

He said that they had set up a special unit to probe extremist elements with specially trained officers, however those officers had been removed and transferred to different positions overseas by the current government.

Rajapaksa said that if elected they will once again strengthen the intelligence service in the country, give intelligence officers the required powers and “complete legal protection” to act for the country and ensure its safety.

Home » Intelligence units will be given power and ‘legal protection’ – Gotabaya