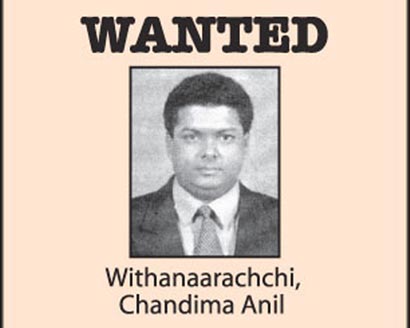 Interpol Headquarters in France has issued a Red Notice for the arrest of Chandima Anil Withanaarachchi, operator of Lankanewsweb.com, for ‘counterfeiting/forgery’.

According to investigations carried out by the CID, Withanaarachchi, a lawyer has fled the country with his wife after several of his fraudulent activities had come to light.

The High Court of Colombo has issued a warrant to arrest him for failure to appear in Court for charges under Articles 113, 102 and 102 to be read with 456 of the Criminal Procedure Code.

They include among other matters, alleged forgery, aiding and abetting and collectively conspiring to prepare fraud. This case is coming up in High Court on September 16, 2010.

Investigations have further revealed that Lankanewsweb.com has been registered as a secret website with a sole contact address ceo@Lankawebnews.com.

However, the website is being operated from Withanaarachchi’s residence in the UK. Lankanewsweb.com has earned notoriety for publishing false and fabricated news slandering President Mahinda Rajapaksa and other members of the Government. Last week it carried a totally fabricated ‘exclusive’ story which said that the Government has given a Chinese firm a contract to clear dead bodies from the Nanthikadal lagoon in Mullaitivu.

The External Affairs Ministry is to take up with the new Government of the UK, Withanaarachchi’s anti-Sri Lankan activities from British soil. Incidentally, it has also being revealed that the website has received funds prior to and following the Presidential Election in January 26, from a millionaire businessmen who had dealings with the LTTE in the North.

Several self-exiled Sri Lankan journalists, including one who is facing corruption allegations in a media organisation are now reportedly hunting for funds from European donors together with Withanaarachchi.