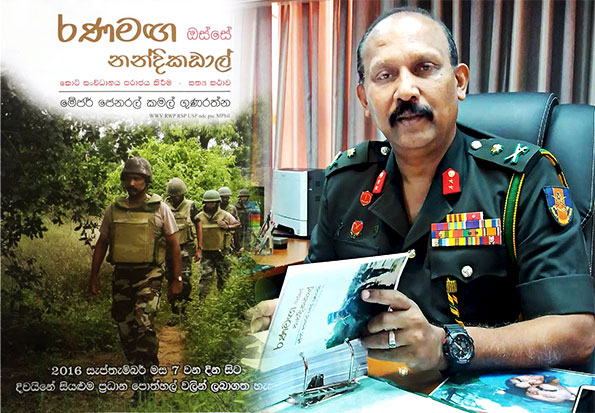 The brazen invasion of Sri Lankan airspace by Indian Air Force jets and transport aircraft on June 4, 1987, enraged Sri Lankan army officers who were, at that time, doggedly and successfully carrying out “Operation Liberation” against the Liberation Tigers of Tamil Eelam (LTTE) in the Vadamarachchi region of Jaffna peninsula.

“It was honestly, a terrible scene. My rage resurfaced; if we had any powerful anti-aircraft weapons in our possession, we would have not only shot down these aircraft but would have crushed them with a sledgehammer into smithereens and flushed them down the toilet,” writes Maj.Gen.Kamal Gunaratne in his book Road to Nandikadal released on here on Tuesday.

“We had no power or capability to shoot down the hooligans who were raping our airspace. We were all totally helpless and powerless against this violation. Great leaders in our presence like Brig. Kobbekaduwa and Col.Wimalaratne were equally powerless. There are no words sufficient to describe the anger, hatred, disgust and sadness which shot through my entire being. For all of us, it was a huge humiliation.”

Blaming the non-equalitarian Indian social order for the way India was treating Sri Lanka, Gen.Gunaratne asks: “As a country which believes, promotes and maintains the caste system in its very social fabric, wasn’t this like treating Sri Lankan as Harijans (low caste people) by a bunch of Brahmins (high caste people)?”

A further reason for dismay for Gen.Gunaratne and his comrades was the world’s turning a blind eye and a deaf ear to Sri Lanka.

Though the Government of Sri Lanka took this matter up with the international community, no country took it seriously and the message conveyed by the world’s powers was: “ India is the regional power. Anything that happens in the region should not affect the Indian interests. Therefore work in collaboration with India.”

The Sri Lankan government then decided to abort the Vadamarachchi operation which was then poised to progress into its second phase.

But this did not stop the LTTE from continuing its aggression. On July 5, 1987, it introduced to the world the first “suicide bomber”, Capt.Miller, who drove a lorry loaded with explosives into the Nelliady army camp in Vadamarachchi.

About the India-Sri Lanka Accord of July 1987, Gen.Gunaratne says that it was  “pushed down  the throats” of Sri Lankans and adds: “ Everybody wished and prayed that India would learn a good lesson from the LTTE one day, for its role in breeding and nurturing terrorists against our motherland.”

However, he completely disapproves of the naval rating’s rifle attack on Indian Prime Minister Rajiv Gandhi when Gandhi was inspecting a Guard of Honor at the President’s House in the Fort after signing the Accord on July 29, 1987.

“When a Guard of Honor is presented by one country to the leader of another, and if a member of that guard assaults the leader who was being honored, it is a disgrace of the highest order to the host country. Not only us, as members of the Sri Lankan Forces, I think all Sri Lankans irrespective of their age, gender or race, should feel ashamed of this highly unethical action of this sailor,” Gen.Gunaratne says.

He then reproduces a poem written by fellow officer Lt.Palitha Weerasinghe, lamenting the “disgraceful act and unpardonable offense” of  the naval rating.

On the deployment of the Indian Keeping Force (IPKF) in Sri Lanka’s Tamil-speaking North and East, from July 30 onwards, Gen.Gunaratne says: “ There were some amongst us who were tired of fighting and were therefore very happy about this new development, but for us battle-hardened young officers and men, it was another bitter experience,” New Indian Express reports.