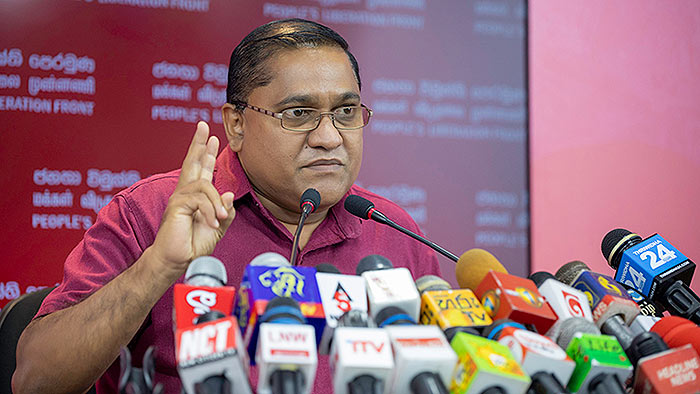 The JVP yesterday called on the government to clash with them ideologically on political practices and policies without sending hirelings to throw eggs and brickbats.

The party’s Propaganda Secretary MP Vijitha Herath addressing a press conference at the party headquarters in Pelawatte said that the government was stooping to the level of thugs to carry out attacks on the JVP activists and campaigns that indicated the level of political bankruptcy prevailing within the government ranks. “We are ready for any debate or discussion on policy matters. We call on the government to act in a civilized manner. The government in the face of losing its popularity and seeing the signs of imminent collapse has resorted to sending paid thugs to attack us. We do not think people would approve such actions. Instead of stopping us, actions of this nature will only further harm the government’s image and politics,” Herath said.

Herath said that eggs had been thrown at his party leader MP Anura Kumara Dissanayake at a private banquet hall in Kalagedihena where an NPP Gampaha District Convention was held on Sunday. “Of those who hurled eggs, two are now in custody. Both of them were former servicemen. They divulged that each of them had been paid Rs 5000. The attackers had been funded and transported to the location by those who had links with the Avant Garde. We had a similar experience a couple of days ago at Pettah while we were marching against the selling of the Trinco oil tank farm. On that day too several people threw eggs at the march. We have videos and photos of those involved in these attacks. As per the statements made by the two former army men now in custody, it is clear that Avant Garde firm had a hand in this. Head of Avant Garde is Nissanka Senadhipathi, who is known as a very close associate of President Gotabaya Rajapaksa.”

“It seems that the government has resorted to this sort of thuggery in the face of losing its popularity. One of our comrades was injured when he attempted to capture the attackers at Kalagedihena on Sunday. We now perceive a threat to the lives of our party members and its leader Anura Kumara Dissanayake. We hold the government and its leaders responsible for this situation,” Herath said.