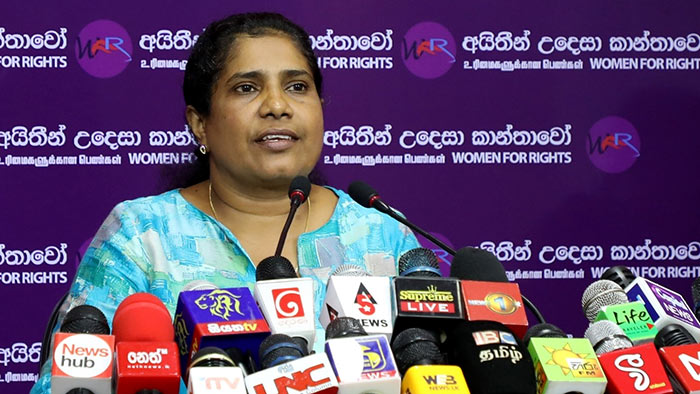 JVP-led Women for Rights (WFR) yesterday warned that mounting public pressure due to economic hardships would soon explode and people would take to the streets if the government failed to provide immediate relief to those hit hard by the pandemic.

Addressing the media at the JVP headquarters in Pelawatte, WFR General Secretary Samanmalee Gunasinghe said that prices of all essential items including food had gone up during the past few weeks and people had found it hard to live on what they earned.

“According to the government figures, Rs. 65,000 was needed for a family of four a month. How many families in this country earn Rs 65,000 a month? People living on estates have to spend over 60 percent of their earnings on food. This is quite similar in other rural areas, too. The government should provide some economic relief to the people immediately,” she said.

There is a gas shortage in the country and the government should get the gas companies to sort it out. The gas companies are bound by their agreements with the government to provide uninterrupted supply. The gas companies say that they can no longer supply gas at the stipulated prices due to the rupee devaluation and the increase in world market prices. That is their excuse but they forgot that they earned massive profits when the gas prices were very low in the world market just several months back. They should part with some of the profit they made.

Chairperson of the WFR, Saroja Savithri Paulraj said that the government no longer had control over the pandemic and people were dying in their hundreds. “