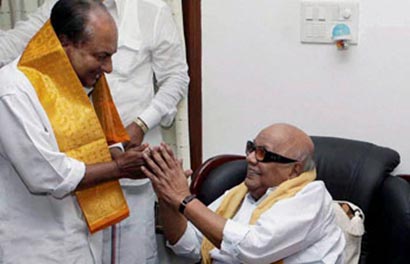 D.M.K. and the newly appointed Tamil Eelam Supporters Organization (TESO) leader Muthuvel Karunanidhi said  he was optimistic that his new struggle to bifurcate Sri Lanka and carve out a Tamil Eelam would receive the blessings of the Indian Central government, eventually.

He was recently showered with praise as the senior most Indian leader by Congress leader A.K.Antony, whom he met as an emissary of the Congress President Sonia Gandhi. Antony also added that they valued his advice. Accepting his advice they definitely did when India voted against Sri Lanka at the United Nations Human Rights Council in Geneva recently.

Karunanidhi was addressing the press conference after reviving the virulent anti-Sri Lanka organization called TESO. The Hindu said, “Asked if the DMK would leave the Congress-led UPA if the Centre refused to support the TESO’s demand, Mr. Karunanidhi said he was optimistic that the effort would succeed. “When many countries decided to support the resolution against Sri Lanka in the United Nations Human Rights Council (UNHRC), India took a belated decision. You should not forget the fact that the DMK’s efforts led to India supporting the resolution.”

Earlier, in the TESO meeting a resolution adopted  demanded the United Nations intervene and hold a referendum among Tamils in Sri Lanka and the Tamil diaspora for the formation of a separate Eelam.”

Reiterating that a Tamil Eelam alone will offer a permanent solution for the Sri Lankan Tamils, who have been subjected to the “biggest ethnic cleansing of the century,” DMK leader and Tamil Eelam Supporters Organisation (TESO) president M. Karunanidhi on Monday said that the goal first meeting to reviveafter the should be achieved only through non-violent methods.

Talking to reporters after the first meeting of the revived TESO, an organisation he founded in 1985, Mr. Karunanidhi said that even if the LTTE resurfaced to resume its struggle, the TESO would urge it to follow the path of non-violence. Asked if he had no faith in the armed struggle of the LTTE, Mr. Karunanidhi said, “Anyone committed to a cause and pursuing it with a pure heart and uncompromising fighting spirit will get our respect.”

Asked if LTTE leader Prabhakaran was still alive, the DMK leader said, “There is no death for warriors.”

Mr. Karunanidhi said that the armed struggle launched by militant groups in the wake of the suppression of Tamils failed owing to various reasons and led to the downfall of Tamils as a race.

“As we are keen on arresting the fall further, we want to change the method of struggle and suggest democratic ways accepted by countries across the world. We seek the support of the Indian government for this democratic struggle.” When his attention was drawn to the claim by CPI (M) leader T.K. Rangarajan, who was part of the Parliamentary team that recently toured Sri Lanka, that none of the Tamil leaders was interested in a separate Eelam, Mr. Karunanidhi said it was possible that the delegation would have met only people with such a viewpoint. “But there are a lot of them who have suffered and there is a need to get their opinion too.”

“The United Nations will soon take a stand and leave it to the Tamils to decide the question of referendum. Already, a referendum is being conducted among the diaspora. This will create the conditions for recognition of the basic concept of Tamil Eelam adopted at the Vaddukottai conference in 1977.” 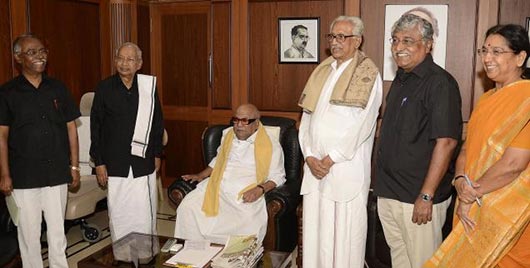