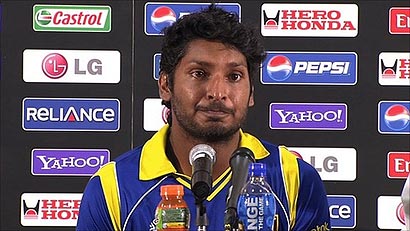 Kumar Sangakkara has quit as captain of Sri Lanka’s one-day and Twenty20 sides, three days after the defeat by India in the World Cup final.

The 33-year-old has offered to continue as Test skipper on an interim basis to aid transition to a new captain.

In a statement on the Sri Lanka cricket website, Sangakkara said his decision was made “in the best long-term interests of the team”.

“A new leader can be properly groomed for the 2015 World Cup,” he added.

Wicketkeeper-batsman Sangakkara, who succeeded Mahela Jayawardene as captain in March 2009, is one of the most consistent players in world cricket, with an average of over 57 in 94 Tests and 38 in 291 one-day internationals.

He was one of the stars of the recent World Cup, scoring the third most runs (465), including 48 in their six-wicket final loss to co-hosts India in the final in Mumbai in Mumbai.

Sangakkara insisted his decision to resign the captaincy was made prior to the start of the World Cup.

“I will be 37 by the next World Cup and I cannot therefore be sure of my place in the team. It is better that Sri Lanka is led now by a player who will be at the peak of their career during that tournament,” he continued.

“It has been a true honour and a great privilege to serve my country as captain during the past two years and, although bitterly disappointed that we could not win the final, I am very proud of the performances of the team.

“I met with the selectors yesterday and I explained my reasons for my decision and I assured them of my fullest support in helping our new captain settle into the leadership.

“In this regard, I have offered to continue as the Test captain for the forthcoming series with England [which starts in Cardiff on 26 May] and possibly Australia if the selectors believe this would help the new captain and aid the transition.

“I have no plans of retirement from international cricket at this stage and subject to form and fitness I would like to be considered for selection in all three formats of the game for the foreseeable future.”

Eloquent and articulate, Sangakkara is seen as an excellent ambassador for his country.

He won warm acclaim for the grace with which he as captain accepted defeat to India in the World Cup final and for the praise he gave to Sri Lanka’s victorious opponents.

All-rounders Tillakaratne Dilshan and Angelo Mathews are among those tipped to take charge of the limited-overs sides, while batsman Thilan Samaraweera is being discussed as an option to lead the Test team.