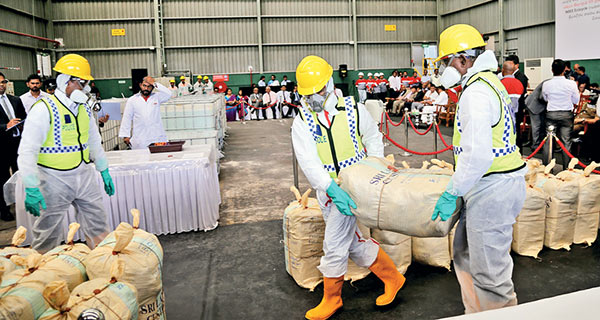 Enforcing the government’s commitment to create a drug free society, 928 kgs of seized cocaine valued at Rs. 16.7 billion was publicly destroyed for the first time in the country in the presence of President Maithripala Sirisena, Prime Minister Ranil Wickremesinghe, Law and Order and Southern Development Minister Sagala Ratnayaka, Justice Minister Thalatha Athukorale and several other dignitaries in Katunayake yesterday. This is the largest stock of cocaine seized to date in South Asia and this is the first time that a seized stock of drugs was destroyed publicly in Sri Lanka.

For the first time, the stock of cocaine which was brought to the location from the Government Analyst’s Department was subjected to a confirmation check by the Dangerous Drugs Control Board at the INCEE Group premises in Katunayake.

Minister Ratnayaka said the decision to destroy the drugs that were confiscated by the authorities in public was taken during a Cabinet meeting.

“Usually the general practice had been to destroy the drugs that are seized at the relevant courts after the cases had been completed and the drugs are no longer needed as evidence.

But, this is the first time such a haul of seized drugs was destroyed publicly.

“The value of the 928 kilograms and 229 grams is Rs. 16.7 billion. In fact Rs. 34 billion is half the annual budget of the entire Police Department,” the Minister said.

“This is including the salaries, capital expenditure etc.

This is a large amount and this is a clear sign of how powerful this drug business is. Generally, it is known that drugs and organised crime go hand in hand together with the weapons trade and the underworld.

However, our government is determined to break this cycle and the President and Prime Minister thus, gave orders to establish a new unit in the Police Department through a process of restructuring in order to fight drugs and related crimes. As a result the unit is functioning efficiently under the leadership of a Senior DIG,”Minister Ratnayaka said. The stock of cocaine which was brought to a storage facility of INCEE Group in Katunayake was first examined and weighed in the presence of the Colombo Magistrate Lal Ranasinghe Bandara.The drugs were then placed in special containers and mixed with a solution.

The liquid cocaine was then transported in a special hazardous waste disposal vehicle to its facility in Puttalam to be destroyed in its incinerator at a temperature of above 1,300 centigrades.

The whole process was carried out under the supervision of the Colombo Magistrate and the Dangerous Drugs Control Board.

The stock of cocaine which was seized by the Police Narcotics Bureau in 2016 and subsequent to court procedures, permission was granted to destroy the seized cocaine.

Accordingly, the Sustainable Waste Management arm of the INSEE Group, INCEE Ecocycle together with the Sri Lanka Police Narcotics Bureau (PNB) and the Dangerous Drugs Control Board (NDDCB) took the responsibility to dispose the stock of cocaine through their cement kiln co-processing for the first time in Sri Lanka.

The Minister thanked the Dangerous Drugs Control Board, Attorney general’s Department, The Government Analyst’s Department, the Tri Forces and Police and all other institutions that assist in eradicating the drug menace.

He said the main aim of the government was to create a drug free country for our future generations.

Minister Ratnayaka noted that the government is also working with several international bodies in order to enhance the intelligence services to smash the drugs network. 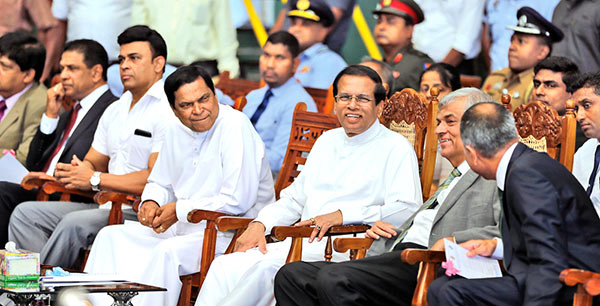