Let those who guessed 40,000 plus dead tell us how many are dead in Haldamulla 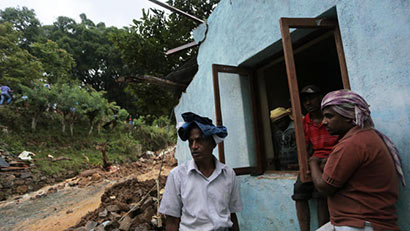 Haldamulla is not in Mullaivaikkal in Northern Vanni territory but none the less the landslide offers a perfect opportunity for those claiming the number of dead in the final phase of Sri Lanka’s conflict to come out and declare how many died from the landslide. The Government of Sri Lanka has done the correct thing by officially seeking assistance from the US Government, the same nation that found only 3 graves one of which was an LTTE grave with 960 bodies from US satellite images taken during the final phase of the conflict.

No sooner the landslide took place a good look at the internet sites as examples would show that people were told ‘hundreds were dead’. By that anyone could assume that the dead varied from 101 to 999 dead. Most of these ‘dead’ and ‘missing’ figures came from foreign sources.

As of 3rd November 2014 the number of officially declared dead remains just 5 (3 females, a male and a 6 year old girl) while 33 are missing. So the gap between ‘feared dead’ and actually dead is far more than the meaning of the English word itself!

They have found a very cosy camouflage in the newly established ‘witness protection’ system where any accusation and allegation automatically gets elevated to the position of ‘credible evidence’ and sources end up getting 20 years anonymity. At the end of 20 years how many would remember to challenge these anonymous ‘allegations’ that crucified nations and targeted people?

So who do we call to count the dead from the most recent catastrophe in Sri Lanka….

We should ask Gordon Weiss the former UN spokesman who was in Colombo throughout but kept increasing the ‘dead’ figures with each year. Gordon Weiss perhaps may like to write a book ‘Landslide’ instead of Cage.

We need to also engage people who even after 5 years are ‘still counting the dead’ but making massive profits from book sales. Frances Harrison may also like to join the BBC and prepare a documentary on landslide victims, perhaps they too have been raped like her Nandani story (the first rape case after the war ended) and these landslide victims can also appeal for refugee status to the UK. We may also find out that like Nandani there may be solicitors in the UK that charge to physically torture people to facilitate the refugee application in what has been a breakthrough in immigration fraud in the UK.

We may also like to refer the landslide case to former Ban Ki Moon panel experts who were in EU employment and through EU funding are publishing reports against Sri Lanka by taking a handful of cases of former LTTE cadres and then declaring Sri Lankan troops tortured and raped them and concluding that ‘systematic rape and torture’ takes place in Sri Lanka. Haldamulla may end up a new report against Sri Lanka from EU-Sooka.

We should not ask UN Colombo to send any Country Team to make their assessment of the missing or dead because the UN will soon appoint someone like Petrie who would negate the findings and declare UN had failed Sri Lankan Tamils and Haldamulla landslide victims were majority Tamils.

We may also find ourselves in for another Resolution from the UNHRC calling for ‘accountability’ by Sri Lanka for the landslide victims. Even if the landslide was a natural rain affected incident there may be some way that a Resolution can be drafted against Sri Lanka. A phone call threatening to cut aid is enough for any country to vote in favour of Resolutions against targeted countries even if they know Sri Lanka is innocent such is the transparency and goodwill in the UN system!

Perhaps the UN may make reference to another ‘joint statement’ between Sri Lanka’s leader and the UN head claiming Sri Lanka promised an investigation.

We are still awaiting the foreign parliamentarians to come forward with their statements against Sri Lanka for handling the post-landslide debacle too. They too may demand that UN launch an investigation or better still seek a humanitarian intervention incorporating R2P because Sri Lanka is incapable of handling the issue.

Then the human rights and charities may also emerge demanding return of land, removal of military and some unknown party will end up funding scores of reports against Sri Lanka and of course we cannot wait for a C4 documentary to emerge ‘Landslide Killing Fields of Sri Lanka’ most probably another Nobel award recipient even before the documentary is out and lots of trips abroad to speak about how bad Sri Lanka has handled the landslide matter. The documentary may end up screened in EU and UK Parliament with tears of viewers screened across mainstream media.

As always the media enjoys ruffling a few feathers so we are yet to know whether the US has been officially told by the GOSL or whether that was something of their own making and we know how far media has been able to make quite a lot of fiction over the years.

These are the scenarios we find ourselves in. Haldamulla district and its plantation estate families will end up recovering from whatever the GOSL is able to provide while all the external parties will not provide a drop of relief but will ensure buckets of accusations are thrown at Sri Lanka. It has been the case for the last 5 years and will continue until their agenda is met.

Home » Let those who guessed 40,000 plus dead tell us how many are dead in Haldamulla