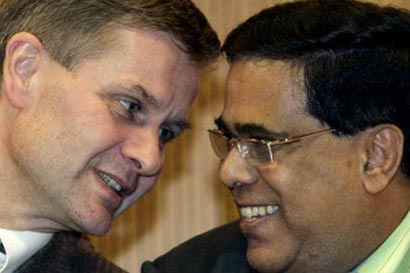 Pursuant to the bi-lateral meeting the President Mahinda Rajapaksa and the Prime Minister of Norway, Jens Stoltenberg, held in New York along the margins of the United Nations General Assembly, Nimal Siripala de Silva, Minister of Irrigation and Water Resources Management and the Leader of the House together with Anura Priyadharshana Yapa, Minister of Environment visited Oslo and had a high level meeting with Jonas GahrStøre, Minister of Foreign Affairs of Norway.

The Ministerial delegation also had meetings with Erik Solheim, Minister of International Development and Environment and Morten Høglund representing the Leader of the Opposition and the Parliamentary Committee on Foreign Affairs and Defense on last Friday (14). The two Ministers were accompanied by Rodney M. Perera, Ambassador, C.V. Rajapakse, Deputy Chief of Mission and Ms. Shani  Kalyanaratne-Karunaratne, First Secretary of the Embassy of Sri Lanka in Oslo.

The highlight of the visit was the bi-lateral talks with Jonas GahrStøre, Foreign Minister of the Royal Norwegian Government who warmly welcomed the delegation and acknowledged the long and close bi-lateral relationship between Norway and Sri Lanka.

The Ministers briefed in detail to Norwegian Foreign Minister and his delegation with regard to the reconstruction and rehabilitation efforts of the Government of Sri Lanka with special focus on the Northern Province. The Ministers stated that several billions of rupees have been spent on infrastructure development and livelihood support and also for the programs to uplift the quality of the lives of people in the North and East out of local funding.  They also briefed the Norwegian Foreign Minister that restrictions on fishing had been fully withdrawn and people in the Northern peninsula are happily engaged in agriculture and fisheries and other areas of livelihood thereby contributing to the national economy.

In the area of reconciliation, the Government of Sri Lanka has rehabilitated and reintegrated in to the society, more than 10,000 ex-LTTE combatants after providing them with vocational training. Currently there are only less than 800 ex- LTTE cadres under custody suspected to have been engaged in terrorist activities awaiting the conclusion of investigations.

In the resettlement process, nearly three hundred thousand displaced persons had already been settled in their native villages with the assistance extended by the Sri Lankan Government. There remain only around 8000 persons to be resettled in due course when remaining areas with land-mines are completely cleared. The Sri Lankan Government, with the assistance of several agencies, has embarked on an accelerated process of clearing land mines.

The Sri Lankan delegation briefed the Norwegian side regarding several baseless allegations raised by some organizations and groups especially in the international arena and Sri Lanka’s stand in connection with those issues. The delegation informed the Foreign Minister that the LLRC report is due in mid November and Sri Lanka expect the international community to give space and time for Sri Lanka to complete its domestic mechanism without rushing into premature conclusions. The Foreign Minister of Norway expressed the view that they too would await the release of the LLRC report.

Sri Lankan delegation further briefed the Norwegian delegation that the Darusman report is based on hearsay information and that it is not an investigative or a reliable report that warrants any serious consideration. It was a report prepared by a panel to advise the UN Secretary General at his own request but with no inter-governmental sanction. It was pointed out that the Sri Lanka had requested the panel members, Amnesty International and other human rights organizations and any other interested organizations to furnish information and give evidence before the LLRC. This request regrettably has not been honored by these organizations including the Channel 4.

The delegation raised their concerns regarding the double standards adopted by some of the countries and international organizations regarding the issue of accountability.

Nimal Siripala de Silva pointed out that although the LTTE has been banned in many countries including the European Union, Norway has not done so as Norway was the facilitator of the Peace Process some time ago. Minister requested the Norwegian Government to consider listing the LTTE as a terrorist organization in Norway, as Norway is no more playing the facilitator’s role.

Minister brought to the notice of the Norwegian Foreign Minister that the Dutch authorities have already embarked upon a criminal investigation in to the LTTE terror network in the Netherlands with connections to some elements in Norway. The Minister thanked the Norwegian authorities for the co-operation extended to these investigations and emphasized that further co-operation is needed to unearth the illegal activities of the LTTE. He urged that Norwegian soil should not be a breeding ground for the re-grouping of the LTTE to carry out terrorist activities detrimental to Sri Lanka’s national interests. The Sri Lankan delegation pointed out that the reference made by Anders Berring Breivik, the Norwegian perpetrator responsible for twin attacks of terror on the July 22, to the LTTE in his manifesto is another clear example of the potential influence of terror organizations on such other groups and individuals. Therefore banning such organizations would be beneficial to security and stability of both countries.

The Sri Lankan delegation also met Erik Solheim and the parliamentary opposition and briefed them on the current developments in Sri Lanka along the same lines.  Ministers briefly interacted with the Sri Lankan community residing in Norway comprising of all ethnic and religious backgrounds during the visit.