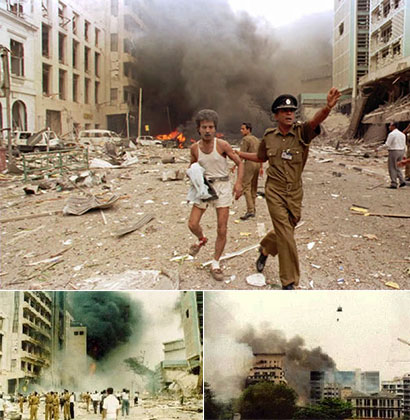 The premeditated murder of innocent civilians was planned by LTTE on 31st January 1996. The time 10:45a.m. Premeditated murder is one of the most serious forms of homicide. The attack on Sri Lanka’s Central Bank was carefully planned, well thought out in advance and wilfully carried out on civilian targets unprepared and unaware of the attack. LTTE came prepared in a suicide driven lorry full of 440 pounds (200kg) of high explosives that crashed through the main gate of the Central Bank building after LTTE gunmen fired at the security guards. 91 CIVILIANS were MURDERED and 1400 were injured. 26 people were permanently incapacitated – blind, loss of limb and other injuries meant that they would never enjoy a normal life. LTTE had denied them their fundamental rights.The bomb destroyed 2 storeys of the 10 storey Central Bank, damaged 8 other buildings and left a crater 8feet deep. Buildings affected were the World Trade Center, Intercontinental Hotel, Galadari Hotel. The front of the Central Bank collapsed into the street. Debris from the bomb flew 1 ½ miles. LTTE had struck once again. Once again on civilians and the number of suicide attacks over 30 years number well in excess of 300. Mangled bodies littered across the streets, buildings ripped apart, personal belongings scattered and people moaning in pain were hallmarks of every LTTE target 20million people went through for 3 decades. The world has forgotten. We have not. We remember every attack, every suicide mission, people fleeing in fear, people scared to walk out of their homes, children unable to play, parents fearful of sending their children for even classes.

Prasanna Wijewardena – a guard at the Central Bank described a blue and brown truck approaching the security barricade outside the bank and two men leaping out and opening fire.

Chandrika Surangi “my youngest son was only three months old when my husband died, the elder was just three years old…’

Chandrika’s husband W A Shantha was a clerk at the Central Bank and both had been married just 4 years. The children believe their father has gone overseas and would one day return.

M G Wimalasena was a staff officer at Central Bank with a 25 year work experience.

Anura Kumara Madurawala 55 was a father of 4. He lost both eyes and his left leg (below the knee).

Dalmie Wickremasinghe from Boralesgamuwa lost his wife Padma who was the Deputy Librarian of the Central Bank.

Z M Rafeek head of Finance and Planning for Sri Lanka and Maldives at the American Express suffered multiple injuries and lost his vision, failure of lung and 11 operations.

Piyadasa Wijesinghe Head of the Media Unit at Central Bank was also blinded by the blast.

Wimal Cooray lost his wife who was also working at the Central Bank as Senior Assistant Director/Department of Information. Their son was only 8 at the time of her death.

H W Sunil a security officer of the Central Bank lost his left knee and his job as he was declared unfit for duty.

Dr. A G M Zuhair a Director of the Central Bank was left totally blind.

All experiencing varied financial constraints for no fault of theirs. Survivors, victims and their families are still trying to cope with the tragedy.

Central Bank security guards B G Kumarasiri and Pathiranage identified the 4th and 5th accused as those who came firing towards the Central Bank. Both LTTErs were in sarong and shirt.

The other 2 witnesses Sumanasiri Silva and Patrick Peiris the later who had caught one of the fleeing LTTERs by his collar and had let him go after seeing the parcel bomb under his shirt. Both Silva and Pieris had ran after both LTTERs who fled into a bakery but were apprehended by other members of the public.

On 31st October the Colombo High Court delivered a 126 page historic judgment. The Judge was Sarath Ambepitiya. The Court sentenced Prabakaran to 200 years imprisonment for his role in the Central Bank bomb blast. Prabakaran was charged under 59 counts. Alongside Prabakaran 9 other LTTERs were charged. Prabakaran’s finger print verified from his arrest in 1982 in India was found on the plaque presented to one of the suicide team. Other LTTErs caught admitted they took part on the instructions of “Charles’ and “Pottu Amman’. As customary, Prabakaran took the last meal with the suicide mission. Prabakaran promised martyrdom for killing innocent people.

The damage by the bomb used in the Central Bank attack was estimated at Rs.375million. The estimated damage to surrounding buildings was around Rs.1050 million. 21 vehicles parked near the Central Bank were also destroyed – damage estimate at over Rs.5.5million.

Why did the LTTE plan a suicide attack on people going about their lives? These were ordinary people who had nothing to do with the LTTE. But they became targets of the LTTE and were brutally killed. Those who survived remain traumatized still and suffering wounds. Who is to be accountable?

Scores of such premeditated attacks by the LTTE have taken place – throughout 3 decades. Why do foreign officials, dignitaries even UN heads not visit them and listen to their grievances because these were real civilians. They were not in any war zone or combat zone. Why do foreign leaders not demand to visit survivors of such attacks when they arrive in Colombo for international events or insist to place a wreath in memory of these dead civilians too? Surely there is something amiss in all the mourning bias being meted out – why does it exclude Sinhalese and Muslims who were both targeted and gunned down by the LTTE?

Sufficient evidence prevails to show how each time officials arriving in Sri Lanka have insisted only on seeing a segment of people totally ignoring that throughout 3 decades another lot of people were subject to premeditated attacks of murder. If there must be justice – justice must be without bias and must be equal.

Just as we continue to remember every heinous crime committed by the LTTE over 3 decades, we remember today all the victims of the Central Bank – those dead, the survivors. We are thankful that since May 2009 we have not witnessed a single bomb, explosion or suicide bombing by the LTTE.