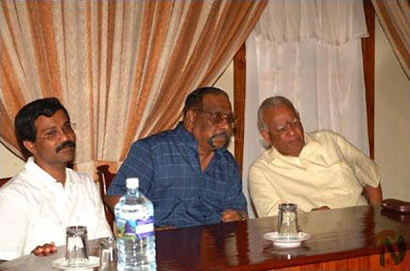 We agree with the US, UK, EU, UN and UNHRC head. There are serious allegations to be investigated. The onus is on the Government of Sri Lanka to immediately INVESTIGATE – how the LTTE emerged, who trained, armed and financially sponsored them and the most important link between a terrorist organization and a political entity such as the TNA. In our eyes both LTTE and TNA are one and the same – the Sri Lankan public now demand that this evil nexus be investigated and the criminality of these entities be exposed and charged under the country’s laws and regulations.

2. Creation of the ITAK (Federal Party) by Chelvanayagam in 1949 (year after independence)

3. Vaddukoddai Resolution 1972 calling for youth to take up arms (Prabakaran was just 18years)

TNA is an unregistered alliance formed in 2001.

TNA and LTTE are making the identical demands. The only factor that differentiates the 2 is LTTE had arms.

Now with the LTTE factor removed TNA is continuing the same demands.

a) Recognition of Tamils as a distinct nationality

b) Recognition of a Tamil Homeland with guaranteed territorial integrity

c) Recognition of the inalienable right of self-determination of the Tamil nation.

d) Recognition of the right to full citizenship and fundamental democratic rights of all Tamils.

“Accepting the LTTE’s leadership as the national leadership of ‘Tamil Eelam’ Tamils and the Liberation Tigers as the sole and authentic representative of the Tamil people, let us devote our full cooperation for the ideals of the Liberation Tigers’ struggle with honesty and steadfastness. Let us endeavour determinedly, collectively as one group, one nation, one country, transcending race and religious differences, under the leadership of the LTTE, for a life of liberty, honour and justice for the Tamil people.”

In investigating and establishing the links with LTTE-TNA every killing and act of crime committed by the LTTE automatically incriminates the TNA as being guilty by association.

LTTE’s crimes include suicide missions, destruction of civilian property, premeditated targeting of civilians, denying fundamental rights under the UN Charter to Tamil men, women and even children by forcibly recruiting them as terrorists, denying children their right to life, right to live with parents, right to education and right to freedom of movement, banks heists, political assassinations, narcotic trade, human smuggling and a host of other crimes which TNA by association with LTTE becomes culpable. Investigate!

When Germany was denazified by the Allied Forces with the objective to totally eliminate any ideology associated with Nazism.

The public have been demanding that the GOSL INVESTIGATE the LTTE and its links to the TNA.

This investigation must commence now. The Public must be invited to send all evidence of such ties and the State must bring criminal charges against all the men behind these two movements having proven their guilt by association for the bulk of LTTE crimes were meted upon civilians and under Geneva Conventions and all other customary international laws civilians are non-combatants and anyone targeting them in the pre-meditated manner the LTTE had using suicide bombers becomes a war crime and if TNA is guilty by association all TNA members must be brought to trial using all the country laws already in place to facilitate this.

WE DEMAND AN INVESTIGATION INTO LTTE-TNA ALLIANCE without delay.