In September 2009 Channel 4 claimed “we are unable to vouch for the independence of her testimony’ but there was no disclaimer and Vany Kumar was the star witness for C4’s ‘Killing Fields’ film. We soon discovered she was no witness but a member of the LTTE. Another lie caught red-handed. The question is can Vany Kumar a member of the LTTE be used as a ‘witness’ and how many other LTTE have been so far used as ‘witness’ hiding behind the UNHRC’s ‘witness protection act’. How fair is this on legal and due process of accountability to grant terrorists witness protection and at times new names? What assurance will UN/UNHRC and the UN investigating panel give to ensure that LTTE members are not given and have not been given ‘witness protection’ and 20 years anonymity?

Spencer Ackerman’s article in 2013 ‘Terrorist entered witness protection, then fled the United States’ is an excellent expose. ‘Should you ever be accused of terrorism, here’s what you should do: snitch on your friends, demand to be placed under witness protection, then fly out of the country’. According to the Justice Department report not only is this easy to do it has actually happened.

The episode of Vany Kumar has to be taken in context with this reality.

Spencer Ackerman highlights how 2 suspected terrorists place in the federal witness security (WITSEC) program managed to elude the US Marshals Service’. So what happens if they do get away with new identities thus escaping the ‘no-fly list’? Worse still, what if terrorists included under ‘witness protection’ was with the intent to give them new names and allow them to disappear with safeguard of 20years icing on the cake? 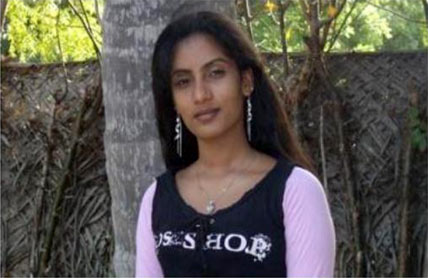 [The photo taken in the Vanni of Vany Kumar must have been prior to the outbreak of the conflict. She does not look the agitated ‘civilian’ C4 and others profess her to be]

She first appeared on C4 in September 2009 as Damilvany Gnanakumar.

C4 described her as a

Who exactly is Vany Kumar?

The Guardian published on 30th May 2009 an article titled ‘Call to free British medic held in Sri Lanka war zone’.

Vani Kumar was described as a ‘British woman’ working at a hospital helping victims of Sri Lanka’s civil war. She was said to be ‘interned in one of the island’s detention camps’. If interned how did Vany manage to strike contacts with the outside world?

Then began a global campaign to project the British woman helping the wounded in a hospital in the Vanni as being victim while the British Foreign Office took over to with the British High Commission in Colombo to secure her release and return to the UK. What is interesting is the manner that the UK Mission in Colombo spokesman made a public announcement to this effect.

The only positive thing we can take out of this article interview is that ‘the estimates for the death toll this year alone range from 8000 to move than double that number’. (double that makes 16000, how did that come to 40,000 and more is the question!)

On 12th May 2009 the Guardian wrote an article titled “Eyewitness Sri Lanka: ‘This is too much to take. Why is the world not helping?’

Some relevant quotes from the article:

Vany Kumar, 25… in a telephone interview with the Guardian, she describes life on the front line. (how did Vany Kumar have access to dial UK from the Vanni?)

Reddy refers to Vany Kumar as Damilvany Gnanakumar and asks a very simple question. How did she land in the island nation and how did she stay on in the tiger-controlled territory for nearly 15months? She had arrived in February 2008, but how did she travel to LTTE area because without contacts she had no way of traveling to LTTE-held territory.

The crux of the matter is that Vany Kumar, Damilvany Gnanakumar or whatever other name she is being referred to is not a civilian and the fact that she is a member of the UK based Tamil Youth Organization which has been declared as a LTTE front by the GOSL automatically links her to LTTE. The fact that various media groups, film makers and even advocacy groups have used her to be portrayed as a holiday maker in the Vanni caught up amongst the rest of the civilians is totally out of line. The public opinion centred on several interviews conducted using her have no credibility in the light of her connections to the LTTE.

This next raises a very alarming question – what about all the reports that have been compiled against Sri Lanka, how valid are they?

We cannot forget that the LTTE had its own CIVIL TERROR FORCE, these were civilians that were trained to fight, trained in arms handling and trained to attack whoever was ordered to be the enemy of the LTTE. Do we know how many CIVILIANS were in that Civilian Terror Force? We do not, but we do know that orders had been given by Prabakaran himself to recruit and train 7000 civilians – so where are these people, who are these people and are they also ‘witnesses’ against Sri Lanka and how many of them have the UN/UNHRC/UN investigating panel or the scores of Human Rights and Advocacy Groups included under the banner of witness protection, given new names, new identities and worse how many have fled the radar?

These are serious questions that the UN officials must answer with responsibility otherwise the entire witness protection program looks to be another bogus initiative to give safe haven to terrorists.