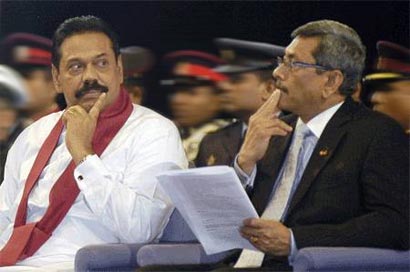 The LTTE in the US has filed a case against President Mahinda Rajapaksa for killing ‘Colonel’ Thambirajah Ramesh during the final phase of Sri Lanka’s successful war against the LTTE.

Defence Secretary Gotabhaya Rajapaksa told The Sunday Island yesterday that the move on the part of the LTTE and those who couldn’t stomach Sri Lanka’s victory wasn’t surprising.

It had been a part of their overall strategy to embarrass and humiliate Sri Lanka’s leadership, he said pointing out the US judiciary was moved in the immediate aftermath of a UN announcement of a $ 10 m new anti-terrorism centre to fight the scourge of terrorism.

Ramesh’s wife, Vathsala Devi (ex-LTTE cadre) filed the case on behalf of the LTTE in New York through Attorney-at-Law Visvanathan Rudrakumaran, a member of the LTTE delegation to the Oslo-managed talks in 2002-2003 period during Ranil Wickremesinghe’s tenure as the Prime Minister.

The LTTE is believed to have helped Devi to flee Sri Lanka shortly after the conclusion of war in May 2009 and reach the US by a circuitous route.

Rudrakumaran, a New York based US citizen, is the “Prime Minister’’ of the Provisional Transnational Government of Tamil Eelam (TGTE) and one of the most influential LTTE leader’s in the post-Prabhakaran era.

He made his move in the wake of Sri Lanka demanding that the likes of Rudrakumaran and Adele Balasingham, UK based wife of the late LTTE chief negotiator Anton Balasingham, should be held responsible for war crimes.

SL’s UN mission pushed for action against those LTTEers living in Europe and North America at a recent meet with the US-based Human Rights Watch (HRW).

Defence Secretary Rajapaksa said that the latest judicial move was the culmination of a stepped-up anti-Sri Lanka campaign conducted by the LTTE in the US, Europe and Australia since the screening of ‘Sri Lanka’s Killing Fields’ by Channel 4 in June.

Devi alleged that her husband had been killed by SL troops after being captured on the battlefield.

The Defence Secretary said that a move had been also made against Sri Lanka’s No 2 at the UN, Maj. Gen. Shavendra Silva, the former General Officer Commanding (GOC) of the celebrated 58 Division, which spearheaded the Vanni offensive on one flank.

The New York court action follows three Sri Lankan Tamils moving a US court seeking compensation from President Rajapaksa in the post-war era. In this case the attorney for the petitioners is Bruce Fein, a known supporter of the LTTE.

The court issued summons on President Rajapaksa in connection with three civil cases filed under the Hague Convention over alleged extra-judicial killings.

The summons on the president has been served on the justice ministry secretary under The Hague Convention, to which the US and Sri Lanka are signatories.

The justice ministry acknowledged the receipt of the summons.

The petitioners were seeking US$30 million as damages on six counts of violating the TVPA.

The External Affairs Ministry sources told The Sunday Island that the US move was similar to that made by the Global Tamil Front (GTF) in the UK last December.

Former UK Home Minister (Labour) Ms Joan Ryan filed an application on behalf of the LTTE front in the City of Westminster Magistrate’s Court on Dec. 3 seeking a warrant for the arrest of Maj. Gen. Chagi Gallage, one of the key strategists in Sri Lanka’s military victory over the LTTE.

The GTF hired Joan Ryan as its Chief Executive after she lost her seat at the last parliamentary polls.

Various groups had targeted senior US, Israeli and Sri Lankan officials in foreign courts over the past several years, prompting some of them to cancel scheduled visits. Israel has been the target of several such cases in the UK, prompting the Jewish State to take up the issue at the highest level.

The External Affairs Ministry said that the LTTE had been attacking Majors General Jagath Dias and Prasanna Silva serving at overseas missions. UK-based Silva was attacked in the UK House of Commons on Sept. 15 during a debate on human rights situation in the Indian sub-continent.