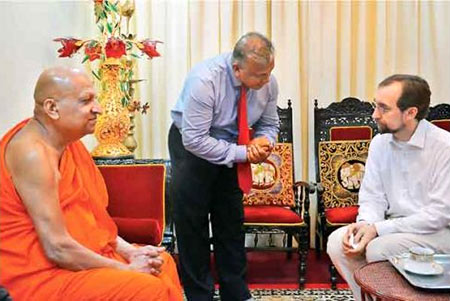 The Maha Nayakas of the Malwatta and Asgiriya chapters have informed visiting UN High Commissioner for Human Rights Zeid Ra’ad Al Hussein that the UN should not unduly interfere with the attempts made by the government to address its issues through a domestic mechanism.

The two Chief Prelates told the visiting UN dignitary that UN’s merely assisting the government to reach its aims in this connection would be sufficient.

The Chief Prelates had told this to Prince Hussein after the latter visited the Sri Dalada Maligawa in Kandy and paid homage to the sacred Tooth Relic of the Buddha.

The Chief Prelates had informed the visiting UN High Commissioner for Human Rights that Sri Lanka under President Maithripala Sirisena and PM Ranil Wickremesinghe was in the process of winning the hearts and minds of people, be it in the North-East or the South.

They said that the two leaders were determined to bring about national reconciliation having gained the trust of the electorate and hence there was no need for a foreign mechanism for such a purpose.

The Chief Prelates also told the UN High Commissioner for Human Rights that after the end of the 30-year separatist war, Sri Lanka was enjoying national reconciliation and religious co-existence.

Speaking at the meeting the Chief Prelate of the Malwatta chapter stated that the incumbent regime was determined to sustain national reconciliation and even pointed out how President Sirisena had recently given an official pardon to a LTTE cadre who had attempted to kill him during the height of the war.

The two Prelates also noted that both the President and the PM were geared to provide a speedy solution to the North-East issue and that they were confident of their ability to resolve such issues in time to come.

They also told Prince Hussein that providing solutions overnight, to problems that had cropped up during a 30-year span was always going to take its time and advised him to give the UNP-SLFP unity government sufficient time to reach its goals.

The audience Prince Hussein had with the Chief Prelates was not open to the media while the Prelates later chanted ‘Pirith’ and blessed the visiting UN dignitary.

Speaking afterwards to the media Chief Prelate of the Asgiriya chapter Most Ven. Galagama Sri Attadassi Thera noted that for the formulation of the UN Charter two of the eminent scholars of Ceylon Professors Jayathilaka and Malalasekera had contributed in large measure back in 1947.

He said the UN Charter has been formulated in keeping with Buddhist philosophy. Speaking after his audience with the Prelates, UN High Commissioner for HR, Zeid Ra’ad Al Hussein stated that at a time when extremism was ravaging globally religious leaders had a pivotal role to play to bring such situations under control or even nip them in the bud. He asserted that in regard to the work rendered by the Maha Nayakas it was noteworthy. Prince Hussein also thanked those who had made arrangements for his audience with the Prelates and said that being able to pay homage to the world renowned Sacred Tooth Relic at Sri Dalada Maligawa was pleasing to him.