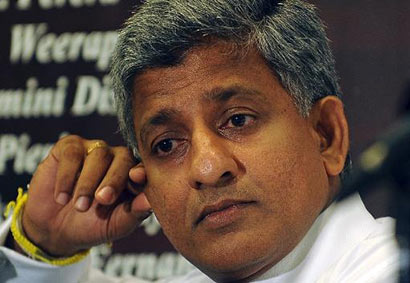 “If Nishantha Malli was in the company of good guys, he (Nishantha) would not have to face to such a scenario. The law should be equal to everyone.

No interferences from me. However, I will be with my Malli,” Ports and Shipping Minister Arjuna Ranatunga yesterday said referring to the arrest of his younger brother Nishantha Ranatunga over the CSN case.

The minister made this comment to the media after lodging a complaint with the Human Rights Commission on the recently concluded Sri Lanka Cricket election.

He said the Director General of Sports had violated several laws related to the cricket and the Sports ministry should take the responsibility in this regard.

2 Responses to ‘Nishantha Malli’s’ fate due to wrong company: Arjuna