Maha season begins; but farmers are not in the field 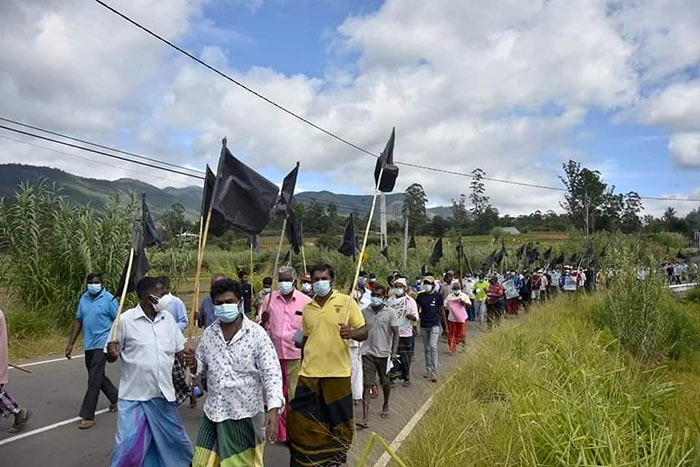 Friday heralded the beginning of the Maha season according to the agrarian calendar; but a majority of the farmers across the country were not in their paddy fields sowing seeds but were on the streets demanding organic fertiliser which the Government has promised to deliver.

While farmers holding placards and banners were protesting against the import ban on chemical fertiliser and the non-availability of organic fertiliser, tense situations were reported in many districts when the authorities tried to open the sluice gates of irrigation systems, a practice done ahead of the start of the seasonal farming.

Charging that the authorities did not understand the needs of the farmer, All-Island Farmers Federation (AIFF) Secretary T B Sarath told the Sunday Times that the Government had failed the farmers by not only taking an arbitrary and hasty decision to ban the import of chemical fertiliser, but also by not providing adequate organic fertiliser for the Maha season.

What the farmers urgently need is nitrogen-based fertiliser to start planting, he said. Instead, the Government has imported potassium chloride fertiliser or Bandi pohora calling it organic fertiliser, while going ahead with plans to distribute it among farmers though this particular type of fertiliser is used just a few weeks ahead of harvesting, Mr Sarath said.

He also echoed the main worry among farmers: a significant reduction of yield due to lack of minerals in the soil as it has been subjected to heavy use of chemical fertiliser for decades.

In Kaudulla, farmer association leader K Asoka Karunaratne said farmers had decided not to cultivate, although the irrigation authorities were releasing water to the fields.

“What is the use of cultivation with water alone? The crops will grow strong only if proper fertiliser is applied at the proper time,” he said.

But farmer leader Karunaratne said prices had shot up beyond their reach and, in some instances, three times the prices that were during the last season. He said he wondered whether the Government was in cahoots with big agrochemical companies and allowing them to make huge profits.

On Friday, the Farmer Federation at Iranaimadu in Kilinochchi held a protest march and staged a demonstration in front of the Regional Agrarian Services Department, demanding fertiliser to begin cultivation.

In the Kilinochchi District, cultivation has begun only in 40 percent of the district’s 71,000 acres of paddy lands.

The federation’s secretary, Muththu Sivamohan, told the Sunday Times many farmers were forced to postpone cultivation due to the unavailability of both organic and chemical fertiliser. He also pointed out that most farmers had little or no knowledge about the use of organic fertiliser in cultivation.

He said most organic fertilisers were of poor quality with more soil than minerals in them and, if used, they largely help weeds to grow freely, adding to the farmers’ woes.

Prof Gamini Senanayake, Chairman of the Sri Lanka Council for Agricultural Research Policy that comes under the Ministry of Mahaweli, Agriculture, Irrigation and Rural Development, said the Government should have implemented the switch to organic fertiliser in stages, expanding up to three years, rather than imposing it on farmers all of a sudden following an overnight decision.

“The farmers’ concerns over organic fertiliser and worries about a drop in the harvest are legitimate. The Government should have educated farmers through awareness campaigns before implementing the organic fertiliser policy,” Prof Senanayake noted.

He said farmers were well aware of the harmful effects of chemical fertiliser, and the Government should have prepared the farmers for the change by pointing them out.

He added that organic fertiliser was not new to Sri Lanka. Prior to the use of chemical fertiliser in the 1960s, Lankan farmers engaged in sustainable farming methods, maintaining the richness of the soil.

The Agriculture Ministry has said the process to distribute what it calls organic fertiliser has begun, and stocks have been dispatched to Agrarian Development Centres in the Ampara, Batticaloa, Anuradhapura, Polonnaruwa, Kurunegala, Puttalam, Trincomalee, and Hambantota Districts.

It said a stock of 30,000 metric tonnes of ‘organic fertiliser’ imported from Lithuania had arrived at the Colombo Port on Tuesday. Since farmers in the Ampara District had already begun cultivation, a section of the stocks had been sent there.

This week, Agriculture Minister Mahindananda Aluthgamage, at the centre of the farmers’ fury, reiterated that the Government would take urgent steps to resolve the crisis and provide relief if the farmers experienced any reduction in their yields due to organic farming.

On Friday, President Gotabaya Rajapaksa appointed another 12-member Task Force for Green Agriculture, with the aim of developing the agriculture economy by adopting eco-friendly organic farming initiatives such as manufacturing toxin-free agrarian products.

The task force, appointed in keeping up with the President’s election manifesto titled “Vistas of Prosperity and splendour”, is required to formulate “a systematic programme for sustainable maintenance of green agriculture by creating opportunities for local and international consumers to obtain toxin-free agricultural products within the next decade.”

Identifying the organic fertiliser required for various crops, improving the quality of such fertiliser production, and producing pesticides and weedicides locally, are among the key tasks vested with the task force.

If there is a shortfall in meeting the requirements through local production, the task force is instructed to identify methodologies and monitoring mechanisms for importing a limited amount of fertiliser of high standard with the approval of the Sri Lanka Standards Institute.

The task force is chaired by Vijith Welikala, Chairman of Wild Holidays (Pvt) Ltd, while the President’s Additional Secretary Vernon Perera will serve as its secretary.

The task force is instructed to submit a monthly report and liaise with other task forces such as the Economic Revival and Poverty Alleviation Task Force and the Presidential Task Force for the creation of a Green Sri Lanka with sustainable Solutions for Climate Changes.

2 Responses to Maha season begins; but farmers are not in the field

Home » Maha season begins; but farmers are not in the field