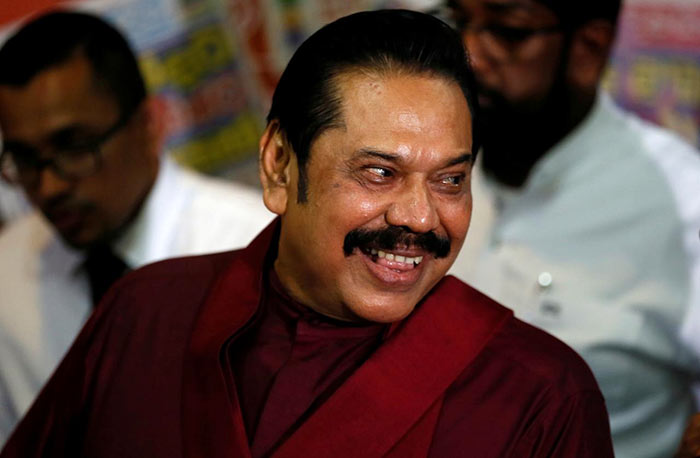 In order to cement his hold on power, Sri Lanka’s newly-appointed Prime Minister Mahinda Rajapaksa has called for a snap parliamentary election in his first public statement following the political developments.

In his maiden speech as the country’s head of government,  the former strongman said he wants elections to be held to eliminate the environment of political instability that has gripped the country ever since President Maithripala Sirisena sacked Ranil Wickremesinghe as the country’s prime minister on the night of October 26.

Rajapaksa said, “The United National Party-United People’s Freedom Alliance (UNP-UPFA) government came to an end as the result of the UPFA leaving the coalition. I was invited to accept the position of PM with a view of forming a new govt.”

“The primary objective of the political party leaders and parliamentarians who have joined me is to immediately hold the provincial council elections that had been postponed continuously and also to call a parliamentary election as soon as possible so as to give the people the opportunity to vote for a programme that will bring the country out of the encompassing economic, political and social crisis,” he said.

However, Rajapaksa is expected to face challenges in the coming days to prove his majority as ousted PM Wickremesinghe has received the support of the Speaker.

Rajapaksa’s return to power ended a more than three-year-old coalition government that was formed by Sirisena and Wickremesinghe on a promise to combat corruption and financial irregularities during Rajapaksa’s time in power.

Sirisena’s broader political front United People’s Freedom Alliance (UPFA) quit the unity government with Wickremesinghe’s United National Party (UNP).
Highlighting the alleged mis-governance of Wickremesinghe, Rajapaksa said, “The value of the rupee has fallen alarmingly. Our country has been downgraded by the rating agencies. The people are oppressed by the ever rising cost of living.”

Rajapaksa said he agreed to become the prime minister as Sri Lankan economy was sinking. He also promised to eschew hate as he sets up an interim government, according to his statement. “Today our country is in a state of uncertainty. Details of a plot to assassinate the president and the former defence secretary have come to light. Those involved in this conspiracy are being exposed by their own actions,” he said.

Trouble was brewing between the coalition partners for some time now. Sirisena had last week accused Wickremesinghe of going slow on the investigations after a man named Namal Kumara in mid-September disclosed the alleged plot to assassinate him and former defence minister Gotabhaya Rajapaksa.

Wickremesinghe, who has termed his sacking as unconstitutional, claims that he is still the legally appointed Prime Minister with parliamentary majority. He had sought an emergency session of the parliament to prove his majority. However, Sirisena suspended the Parliament till November 16. Speaker Karu Jayasuriya on Sunday questioned the president’s decision to suspend parliament till November 16, saying it will have “serious and undesirable” consequences on the country.

The crisis has already taken a violent turn when bodyguards of Oil minister Arjuna Ranatunga, a loyalist of PM Ranil Wickremesinghe,  fired at supporters of Mahinda Rajapaksa, leaving one person dead.

Sri Lanka’s next parliamentary elections are not due until February, 2020. However, the next presidential election must be called prior to that.