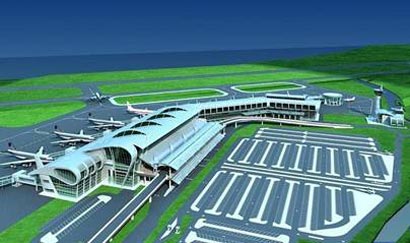 The passenger terminal construction at the Mattala International Airport will commence on April 25 under the patronage of Civil Aviation Minister Priyankara Jayaratne and Hambantota District Parliamentarian Namal Rajapaksa. Country’s second International Airport in Mattala, Hambantota is scheduled to be commissioned by mid 2012. The airport construction project is in full swing on a 2,000 hectare land at a cost of US $ 209 million.

The project which consists of two phases was launched by President Mahinda Rajapaksa on November 27, 2009 in line with the Greater Hambantota City Development Programme.

After completing the first phase of the airport construction project, the first flight will land in Mattala airport by mid 2012 fulfilling a long felt need of having a second international airport for the country.

The construction work is carried out in accordance with international standards established in the airport and aviation industry such as ICAO specifications for Code 4F. The runway, which is being constructed under the first phase is 3,500 metres in length and 75 metres in width. It is large enough to operate any aircraft such as A380 Air-bus, the largest aircraft ever built. Passenger terminals and many other infrastructure development activities are being carried out under the first phase, Civil Aviation Minister Jayaratne said.