Media should not ridicule the concept of reconciliation – President 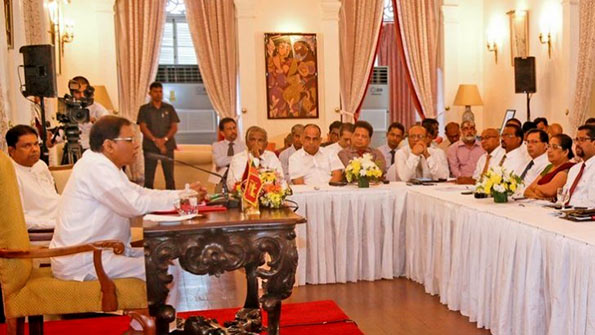 President Maithripala Sirisena said the media should not mock or ridicule a noble concept like reconciliation as that would give a wrong interpretation about a positive concept to the younger generation. “There is media freedom today and it is up to you to crticise anybody. However, the media should not ridicule noble concepts like reconciliation by stating that reconciliation is an international conspiracy to divide the country. Such misinterpretations will give a wrong twist to the real meaning of reconciliation and mislead the younger generation,” he said addressing Media Heads and Newspaper Editors at the President’s House in Colombo today (September 2).

The President described his talks with the visiting United Nations Secretary General Ban Ki-moon and said that he explained the steps taken to strengthen democracy through the 19th Amendment to the Constitution and the establishment of Constitutional Council and Commissions. He also briefed about the reconciliation process, return of land in the North to original owners, resettlement, rehabilitation and development.

Mr Ban Ki-moon expressed his appreciation over the progress made by the government and assured fullest cooperation and assistance to the government for carrying out these tasks, he said. “UN Secretary General’s smiling face, when he expressed his appreciation, is a glowing reflection of the United Nation’s goodwill towards Sri Lanka,” the President said.

The President added that the government’s intention is to return the remaining privately-owned lands in the North to rightful owners within the next three months. While vast extents of land have been returned to the original owners, the state land is to be given to those who are landless and living in welfare centers or with friends and relatives.

Answering a question he said that there are extremist Tamil elements attempting to prevent any solution to the land issue. When the government allotted land to the people, these elements force them not to accept those lands as these extremist elements want the problems to continue as that would suit their ulterior motives. When asked about demonstrations in the North, the President said he expected bigger protests during the UN Secretary General’s visit as there are elements with agendas.

When asked about different positions of the Tamil National Alliance TNA) and the Chief Minister C V Vigneswaram, the President said that the government wanted to bring all these elements with different postures in the North and South to an acceptable middle point and when the current policies continued with success it would happen automatically.

President Sirisena said that Sri Lanka should look at the global policies towards us with wise, rational and prudent manner. A government Minister to protest in front of an international organization is not the sane behavior of a cultured nation, he pointed out.

“During the hour-long bilateral discussion and the 10 minute one-on-one discussion with Mr Ban Ki-moon, there was no mention about the UNHRC resolution,” he answered when a journalist wanted to know if the Secretary General raised the issue of UNHRC.

He said that there are divisions within any political party and the degree of the rift changes from time to time. Referring to the 65th Anniversary of the Sri Lanka Freedom Party (SLFP), he said that all the party members are invited to attend the rally in Kurunegala on Sunday.

Talking about the future of the consensual government, he said, “Let us work together to develop the country, eliminate poverty, reduce the debt burden and to establish a free, democratic nation of contended citizens with equal rights, living in perfect harmony. Let us unitedly face the challenges such as UNHRC resolution and ensure unity among the communities while zealously guarding the honour of the valiant war heroes.”

Home » Media should not ridicule the concept of reconciliation – President