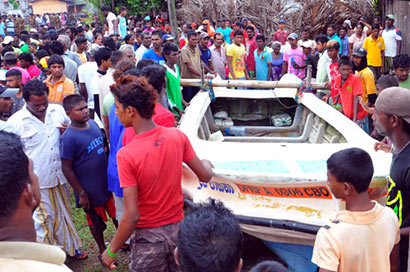 A catastrophic blunder of epic proportions caused by the Department of Meteorology in not providing periodic weather updates in the wee hours of Saturday, resulted in at least 35 fishing boats going missing in the Southern coastal belt, where at least eight fishermen were found dead by last night.

Pandemonium reigned supreme following the tragedies, which reportedly started occurring around 2 a.m. on Saturday, but the warnings came only by 5 a.m.

An emotionally charged group of fishermen and their families, who were at a loss to know where their kith and kin and loved ones were, vociferously protested on the Colombo-Galle rail track, even preventing four trains moving on the Southern coastal belt between 9 a.m. and 10 a.m. However, sanity prevailed with the intervention of the police where the trains were allowed to move, a spokesman for the Train Control Room said.

This is indeed an outrageous incident where at least eight were confirmed dead and 35 fishing boats missing, all because the Met Department delayed reporting the adverse weather conditions when it occurred as early as 2 a.m., Deputy Minister of Fisheries, Sarath Kumara Gunaratne, told Ceylon Today.

Blaming the Met Department officials, he said had they disseminated the alarm well in time, all 22 Operational Centres of the Ministry would have been alerted, including the 10 main ones in Colombo, Galle, Beruwala and Kalutara, which could have circumvented the tragedy.

The Deputy Minister also said a number of privately owned television stations had phoned him to complain the adverse weather was not reported, which prevented them from reporting it, consequently by which the tragedy could have been avoided. “If this is the weather forecast system we are having, we might as well not have a Met Department,” an irate Deputy Minister said.

He also blamed the fishermen for not using the life jackets they have been issued with, which also seem to have led to the deaths. “Irrespective of what happened to the boats, these fishermen could have been saved,” he said. The Sri Lanka Navy has rescued the bodies of four, one from Balapitiya, one between Colombo and Moratuwa and another two with the assistance of a merchant ship.

He also said by last evening, the SLN had rescued six, three from Colombo, two from Beruwala and one from Induruwa.

Meanwhile, the Sri Lanka Air Force has deployed four helicopters to search for the missing fishermen at sea. They were two Y12 fixed wing aircraft and two Bell 412 helicopters.

He also said the fisherman who was rescued at Beruwala was dropped at the Katukurunda Airbase so that he could be sent to hospital.

While these rescue operations were done in the morning, the SLAF choppers, last evening, airlifted a man who was clinging on to a buoy near a coral reef, to Katukurunda and transported him to the Nagoda Hospital. The SLAF had also secured four fishermen, who were struggling in the sea to the Navy vessels, he said. The operation was commenced at around 10 a.m. and the delay was due to the inclement weather, which prevented the aircraft from being airborne earlier. The first Y 12 aircraft was returning to Ratmalana for refuelling, while the other was taxiing for the takeoff, Wijesuriya said.

When contacted by Ceylon Today for comments, Director General of Meteorology, S.H. Kariyawasam, admitted there was a lapse in reporting the adverse weather conditions, which prevailed in the early hours of Saturday but said his department had issued repeated warnings from as early as 4 p.m. on Friday about the adversities in the coastal areas.

“We have been advising both fishermen and naval craft to be vigilant in the deep and shallow seas from Mannar to Puttalam via Colombo and Galle where the south western winds could go up to 80 kilometres per hour. This is also the season for the high tides and adequate warnings were given well in time despite the lapse in the delay in the updates,” he said.

He also said that Sayura Radio had also called him between midnight and 1 a.m. and the latest details had been given to it. The fishing community also should have been more careful about these warnings, which they have not heeded, he said.

Meanwhile, Duty Forecaster, Channa Rodrigo, said the forecast, which was issued at noon yesterday said there would be thundershowers in the South-Western areas where gale force winds were expected to blow at around 30-40 kilometres while the North-Eastern winds could even be stronger at speeds at between 50-80 kilometres.