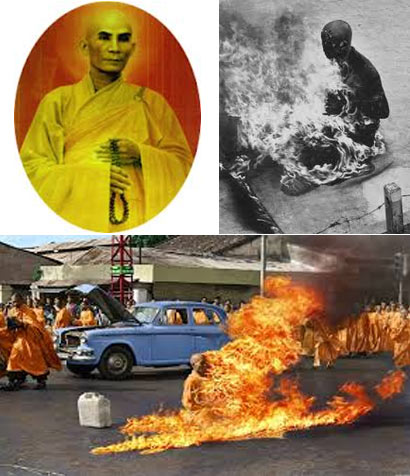 It was described as a revolution ignited by a single match. June 11, 1963 was the date, Thich Quang Duc, a 66 year old Buddhist monk sat down calmly in the lotus position in a busy intersection in Saigon and lit himself on fire. While those watching wailed the monk did not make a sound nor moved a muscle depicting his self-discipline. The self-immolation was to protest against the US-backed South Vietnamese Ngo Dinh Diem’s Catholic Government’s repression of Buddhists.  The act brought self-immolation into “the global repertoire of protest” and the impact was immense and immediate locally and globally and brought hundreds of thousands of people together – expressing their rage, grief and resulted within a few months in America overthrowing its puppet.

50 years on flowers still adorn the spot where Thich Quang Duc sacrificed his life for the cause of achieving equal treatment of Buddhism and Buddhists in South Vietnam which had always been a Buddhist majority country but nevertheless governed by a minority Catholic led Govt. under Ngo Dinh Diem backed by the US and the Vatican.  Diem banned the flying of the traditional Buddhist flag in Hue on Vesak day leading to unceasing protests and civil unrest.  Finally President Kennedy took the decision that Diem had to go. In the space of 5 1/2 months the deaths of Quang Duc, Diem and Kennedy took place and changed the course of history of Vietnam, USA and the world at large.

French colonial administration in Vietnam ended in 1954 with the comprehensive defeat of the French army by the Viet Minh at the battle of Dien Bien Phu, leading to the 1954 Geneva Accords.  The country was divided into North Vietnam headed by Ho Chi Minh and South Vietnam by Emperor Bao Dai. Nationwide elections that were to be held in 1956, as had been stipulated by the Geneva Conference, were scuttled by South Vietnam eventually leading to War in Vietnam (1959–1963) and escalation to the full participation of American combat troops following the Gulf of Tonkin incident in 1964. Elections held only in South Vietnam in 1956 placed Ngo Dinh Diem a US-backed candidate as President. https://www.mtholyoke.edu/acad/intrel/pentagon2/pent7.htm

He was a French-educated Catholic in a 90% Buddhist majority country which questioned the agenda behind his placement. His rule was one of repression and nepotism.

Diem’s sister-in-law’s (Madam Nhu) wife of Diệm’s younger brother and chief adviser Ng Dinh Nhu remarks on Quang Doc’s self-immolation was “let them burn” “and we shall clap our hands”. The death did change Kennedy’s view on Vietnam and on Diem who was overthrown and killed on 2 November 1963 by an Army Coup.  Nguyen Van Thieu was Diem’s replacement and Kennedy himself was killed 3 weeks later.

Quang Duc’s death forced international pressure on Diem to announce reforms to pacify Buddhists though he never carried them out making the situation worse. Raids were launched on Buddhist pagodas, Quang Duc’s heart, being a relic, was seized and led to several other monks immolating themselves.

Diem being a Catholic carried out discriminatory policies against Buddhists at all levels of public office and many Buddhist military officers had to convert to Catholicism for the sake of their careers. Only Roman Catholic villagers were armed and all Buddhists were purposely denied promotions. Diem’s Government allowed and watched as Buddhists were attacked and their property destroyed. Buddhist villages were converted to Catholicism en masse. In a Buddhist majority country, Catholics ended up landowners given special exemptions in property acquisition and Roman Catholics were exempt from land reform. The Buddhists were banned from flying the Buddhist flag (Decree Number 10) for Vesak, the birthday of Gautama Buddha while Catholics were encouraged to fly the Vatican flag. Unarmed protestors were even shot dead.

The 5 demands made by Buddhists to Diem’s Government were:

(1) rescind the order against displaying the Buddhist flag;

(3) halt arbitrary arrests and intimidation of the Buddhists;

(5) compensate the families of those killed and punish the perpetrators. 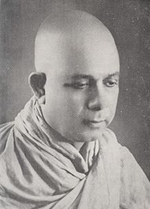 Ven. Narada Maha Thera stands above everyone else in strengthening links between Sri Lanka and Vietnam. He has undertaken over 17 dhammaduta missions to Vietnam.

In Sri Lanka following the abortive Catholic Army Officers coup in January 1962, the Bauddha Jatika Balavegaya (BJB) was formed under the leadership of L.H. Mettananda, fiery Buddhist nationalist, to combat Catholic Action in its numerous manifestations in both the public and private sectors, and the armed forces. 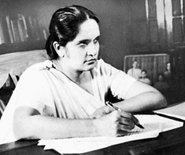 Thousands of Buddhists supported the BJB and attended the public meetings that were held all over the country. The BJB published a book entitled ‘Catholic Action – A Menace to Peace and Goodwill’ (1963) in both English and Sinhala languages and distributed it to the public to make people aware of the designs of the Catholic Action Movement. In the public sector N.Q. Dias, CCS (civil servant) then Permanent Secretary to the Ministry of Defense & External Affairs embarked on a plan to reform the Armed forces with a view to forestall a repeat of the aforesaid abortive coup which had strong links to the Catholic Church.

In hearing of the denial to hoist the Buddhist flag to mark Vesak, and subsequent shootings that led to nine deaths of Buddhists in Hue, South Vietnam on May 8, 1963,  and civil unrest that followed, prompted the Buddhist Jathika Balavegaya in Sri Lanka to come out in strength to show allegiance with a fellow Buddhist nation. Mettananda and the BJB led public agitation on behalf of the persecuted Buddhists of South Vietnam, having made representations to Prime Minister Sirimavo Bandaranaike, who did not need much to be pushed into action. She was quick to have her envoy at the UN – R S S Gunawardena raise the issue of the oppressed Buddhists of South Vietnam, before the UN General Assembly and the UN Security Council. R S S Gunawardena, one of Sri Lanka’s most effective Ambassadors at the UN and role model for current diplomats and officials at the Ministry of External Affairs, eloquently delivered Sri Lanka’s appeal on behalf of the Buddhists of South Vietnam.

On October 8, 1963 the UN General Assembly voted to send a fact-finding team to South Vietnam headed by R S S Gunawardena to investigate the charges of repression against the Buddhists. It was while R S S Gunawardena and the UN fact finding mission was in Vietnam that Diem was overthrown on Nov. 2, 1963 by the South Vietnamese Army backed by the US Govt.

Implications of the self – sacrifice of Thich Quang Duc

The self – sacrifice of Thich Quang Duc was not in vain. It had wide ramifications as subsequent events have shown. Malcolm Browne the Associated Press photographer was haunted by his decision to take photographs of a burning monk instead of saving him. In contrast a Vietnamese policeman that tried to break the barrier of monks and was stopped threw himself to the ground and prostrated himself in front of Duc in reverence and all others followed. It was a stunning sight and beyond what words can denote. The Thero’s body was wrapped in saffron robes and taken to a pagoda where student Buddhist monks formed a human barrier and the thousands that began to gather claim to have seen a vision of the Buddha’s face in the sky at sunset.

Yet, the photos Browne took and published did help to change the world’s perception of the Vietnam War. The photographs won Malcolm Browne a Pulitzer Prize in 1964. The photo still remains one of the most famous and haunting images that shocked the world. A US embassy official said that the photo “had a shock effect of incalculable value to the Buddhist cause, becoming a symbol of the state of things in Vietnam”. President Kennedy himself said “, “No news picture in history has generated so much emotion around the world as that one.” The world must now realize the anguish that the present day Buddhists feel in seeing similar elements out to destroy and take over Buddhist heritage and Buddhist lands.

The daring self – sacrifice of Thich Quang Duc may not attract contemporary media news even in pre – dominantly Buddhist countries, but his place in history even the US acknowledges. The only part of his body that wasn’t burnt was his heart and it is kept at the Reserve Bank of Vietnam as a holy relic.

Incidentally, weeks after the self-immolation and the publication of the photos, the New York Times ran a full-page advertisement by American religious leaders titled “We too, Protest” containing the photo of Thich Quang Duc and called upon the American public to support Buddhists who opposed Diem’s regime. To understand the act of Quang Duc, a person needs to understand the Buddhist illustration of self – sacrifice – the story where a mother tiger ravaged with hunger was prepared to eat her cub, a Bodhisathwa had then offered himself to save the life of the cub – the story illustrates the sacred place Buddhism gives to self – sacrifice for a noble cause.

Thich Quang Duc’s last words before his supreme sacrifice was in a letter:

“Before closing my eyes and moving towards the vision of the Buddha, I respectfully plead to President Ngo Dinh Diem to take a mind of compassion towards the people of the nation and implement religious equality to maintain the strength of the homeland eternally. I call the venerables, reverends, members of the sangha and the lay Buddhists to organise in solidarity to make sacrifices to protect Buddhism.”